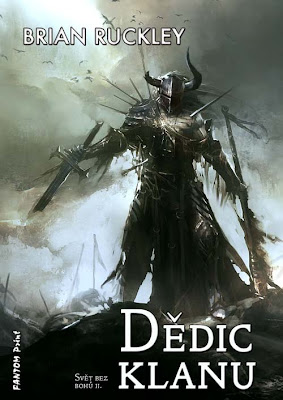 Brian Ruckley’s “Godless World” series is one of the new fantasy series that I enjoyed a lot and find its place among my favorites. Also, Brian Ruckley picked my interest in his works not only with his debut series, but also with his short story, “Beyond the Reach of His Gods”, published by Rogue Blades Entertainment in the anthology “Rage of the Behemoth”. Looking for news about Brian Ruckley I discovered on his blog the artwork for the Czech edition published by Fantom Print of the second novel in the “Godless World” series, “Bloodheir”. I am not entirely sure who the character on the cover is, but I believe that the artwork matches the atmosphere of the novel and catches a glimpse of that harsh world. The artist of the cover is Kekai Kotaki, one of the best fantasy artists, who also made an excellent cover for the e-book edition of Robert Jordan’s “The Great Hunt” and who I had the pleasure to have among my guests of fantasy art posts.
Posted by Mihai A. at 12:48 PM

That is a sweet cover Mihai! Beautiful work by Kekai Kotaki.

Thanks for another plug for RBE's RotB. :)

Kekai Kotaki is an amazing artist :)
It is my pleasure, Jason ;)