"The Crown of the Blood" by Gav Thorpe 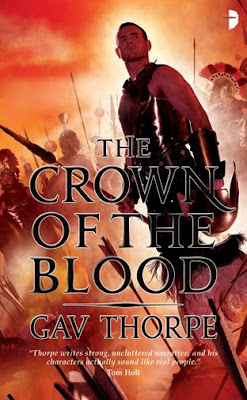 "The Crown of the Blood"
by Gav Thorpe
Format: Paperback, 464 pages
Publisher: Angry Robot Books
Review copy received through the courtesy of the publisher, Angry Robot Books
He had brought his master’s Empire to the furthest reaches of the world. All had fallen before him. Now he longs for home.
But home isn’t what it was. Could it be that everything he’s fought for all those years has been a lie?
Gav Thorpe is one of the authors that enrich the vast Warhammer universe with his novels, contributing with more than 15 novels to this setting. “The Crown of the Blood” is his first step outside the Warhammer universe and the first novel in the fantasy series with the same title.
“The Crown of the Blood” is set in a world that resembles with a mix between the Roman and Middle Eastern empires, but with Gav Thorpe’s personal additions to the mixture that make his world captivating and interesting. Greater Askhor is an empire that reached its highest peak after years of war and conquest and it seems that it cannot be challenged by anything. But times are changing and so is the destiny of the empire. But not only the laical parts have a role to play in the story, the spiritual level has a strong word to say too. Myths and supernatural elements embrace each other in this dance for power. Unfortunately, although I did find the theological part one of the most interesting aspects of the novel, it is also one of the most undermined elements of “The Crown of the Blood”. Its presence is felt only occasionally, hasted most of the time, and it left me rather unsatisfied by its sparse appearances.
With scheming, politics and religious interests coming all into play Gav Thorpe sets the premises for the plot of the novel, a story that picks energy and speed with each turned page. For the first half of “The Crown of the Blood” the story will advance slowly, but once all the wheels are set into motion the pace increases to higher speeds. From that half point forward the novel inclines its balance toward the strong military elements, featuring plenty of action scenes, battles, strategies, tactics and logistics making their presence felt. Gav Thorpe shows real strength in his battle scenes, describing them with efficiency and making them very appealing and almost cinematic to me. The end of the novel is a bit rushed in my opinion, but it has an interesting twist that comes as a pleasant surprise.
The main protagonist of the novel is Ullsaard, a seasoned and successful general, who finds the latest imperial politics stagnating and who develops a new personal agenda. Ullsaard is an interesting character, but like every other character of “The Crown of the Blood” I cannot say that I was very fond or attracted by him. Gav Thorpe balances his characters perfectly in terms of individual interests and alignment, every single one having a personal goal to reach, but without making the character clearly good or bad. The fact that Gav Thrope doesn’t name a faction or character as the good or the bad one is the strong point of characterization, but the weakest point is a certain lack of depth, missing elements outside their immediate interest. This and the fact that all are men.
“The Crown of the Blood” makes the song title “It’s a Man’s World” literally accurate. The novel is overwhelmed by male characters and the female characters are just too few, underdeveloped and present only as an accessory for the men of the story. This aspect is disconcerting and I believe that rips an immense hunk from the male characters construction. The women’s presence is for the plot wise purposes solely and nothing more. It is true that patriarchy was the principle at the base of many social organizations, but for the benefit of this story, although the society is clearly a patriarchate, a stronger presence and characterization of female characters would have made “The Crown of the Blood” a more interesting and powerful story.
“The Crown of the Blood” is about intrigue and politics, but it is mostly about military discipline, physical endurance and the strength of the muscles. Gav Thorpe weaved an action driven story for the fans of military fantasy.
Posted by Mihai A. at 1:05 PM

This sounds so good - what an amazing world this author has created. Thanks for the great review. I can't wait to get a hold of this book. You might also enjoy a historical fiction novel out called, "Blood Soup," by Kelly A. Harmon. I just finished it and want to read it again it was so good. Kelly is an amazing writer who really brings you into a compelling and rich story.

Thank you very much. And thank you for the recommendation too :)

I like to read reviews about books which are on my shelf - unread. SoI know what to expect. Your review is very helpful for me. But I'm afraid I can't read The Crown of the Blood before 2011.

Thank you, Michael. I have a reading plan too, but I don't go that far with the planning :D

A reading plan is not that bad - even if you can't read all the books mentioned. In former times I posted my reading plans. Nowadays I avoid it because it raise expectations.