Title spotlight - "The Shadow of the Soul" by Sarah Pinborough 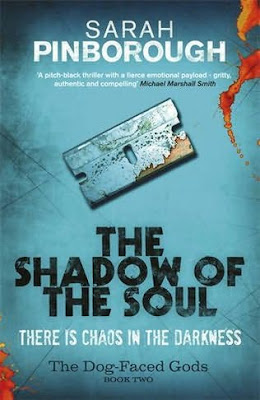 I loved Sarah Pinborough’s “A Matter of Blood”, the first novel in her “Dog-Faced Gods” trilogy, and DI Cass Jones is one of the best characters, if not the best, I encountered in this year readings. Therefore one of my most anticipated releases of 2011 is the second novel in the “Dog-Faced Gods” series, “The Shadow of the Soul”, due to be released by Gollancz on April. Sarah Pinborough’s novel is even more appealing now, with another simple, but very efficient cover artwork, and with a synopsis that tickles my fingers in anticipation of this release.
DI Cass Jones is still dealing with the fallout of uncovering a major conspiracy within his own police station when a terrorist attack rocks London and he finds himself called on to help with the investigation. At the same time he has his own investigation to worry about: young people are dying, apparently committing suicide - and they're all linked by the phrase Chaos in the Darkness, scrawled or sent as their last message to the world.
Then he's given a note from his dead brother Christian, written before his murder: the three words - 'They took Luke' - opens up a whole new can of worms, because Cass knows immediately who They are: Mr Bright and the shadowy Network. His dead brother has set him a task from beyond the grave - to find the baby, his nephew, stolen at birth.
And as Cass tries to divide his time between all three investigations, it's not long before he discovers links, where there should not be. The mysterious Mr Bright is once again pulling his strings, and there's nothing DI Cass Jones hate more . . .
Posted by Mihai A. at 12:00 PM