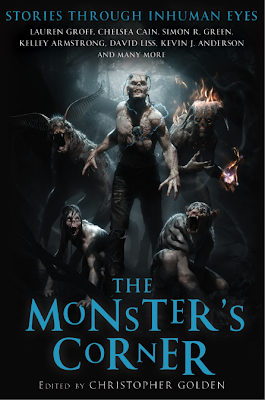 I’ve learned this week that Christopher Golden, the popular speculative fiction author, has a new anthology coming up this year, “The Monster’s Corner”, due to be released by St. Martin’s Press in October. The anthology features all new short fiction and the stories are told from the monster’s perspective. The concept sounds really interesting and resonated with me the instant I learned of it. The line-up looks very interesting as well, with some of the important writers of today’s speculative fiction and some of the authors whose works I enjoyed quite a lot lately.
- “The Awkward Age” by David Liss
- “Saint John” by Jonathan Maberry
- “Rue” by Lauren Groff
- “Succumb” by John McIlveen
- “Torn Stitches, Shattered Glass” by Kevin J. Anderson
- “Rattler and the Mothman” by Sharyn McCrumb
- “Big Man” by David Moody
- “Rakshasi” by Kelley Armstrong
- “Breeding the Demons” by Nate Kenyon
- “Siren Song” by Dana Stabenow
- “Less of a Girl” by Chelsea Cain
- “The Cruel Thief of Rosy Infants” by Tom Piccirilli
- “The Screaming Room” by Sarah Pinborough
- “Wicked Be” by Heather Graham
- “Specimen 313” by Jeff Strand
- “The Lake” by Tananarive Due
- “The Other One” by Michael Marshall Smith
- “And You Still Wonder Why Our First Impulse is to Kill You: An Alphabetized Faux-Manifesto transcribed, edited, and annotated (under duress and protest)” by Gary A. Braunbeck
- “Jesus and Satan Go Jogging in the Desert” by Simon R. Green
Posted by Mihai A. at 1:30 PM

I like anthologies for the varied and short fiction, but find when doing a review that I get bogged down in the number of stories.

Well, it is a bit of a challenge, but I like reviewing anthologies. Although it takes a bit longer than usual :)