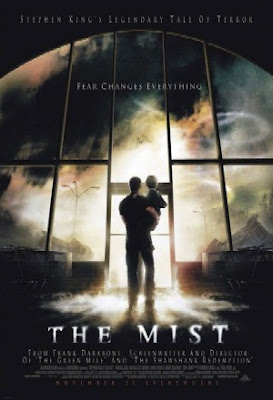 As you may know by now, I am a big fan of Stephen King. I read all his works that fall in my hands and also I like to see the ecranizations of his works. In time I found some poor ecranizations, but others were really good. For "The Mist" I can't make a comparison, because I haven't read the novella that inspired the movie, and I will write only about the movie.
After a thunderstorm, a small town is covered by a thick and unusual mist. The people of the town are attacked by mysterious creatures that are unleashed and concealed by the mist. Some inhabitants of the town who were shopping at the local supermarket are forced to seek cover in the shop. When a local religious fanatic pretends that the mist is a punishment from God, some people find themselves facing a new threat. So those people, including the main character, a commercial artist, David Drayton, face a dilemma, to stay in the supermarket and wait for the creatures or to go outside and deal with this terror? Also will they find out what caused the appearence of the mist and of the roaming creatures?
First of all I have to say that I loved what the movie director, Frank Darabont, made with "The Shawshank Redemption" (1994) and "The Green Mile" (1999), the previously ecranizations of Stephen King's works directed by him. In "The Mist" he creates a good horror movie, with a very well building tension, with terror and suspense and with an excellent end. Also knowing the psychological aspect of Stephen King's works, Frank Darabont manages to catch this aspect well in his movie. Also, the visual effects are very good and I read that Darabont asked Guillermo Del Toro who created the visual effects for "Pan's Labyrinth" and at his recommendation Darabont worked with the same studio. I liked also the interpretation of Marcia Gay Harden, as Mrs. Carmody, and of William Sadler, as Jim Grodin.
Overall "The Mist" is an entertaining and enjoyable movie and I will certainly look to read the novella too.
Posted by Mihai A. at 2:44 PM

I think you will love the short story. I find it to be one of King's best... *very* creepy.

Multumesc. Thank you, I know that appeared in "The Skeleton Crew" and that is in my next shopping list :)

I enjoyed the movie...and the ending made it a classic in my eyes.

Uros, even if I could see the ending coming it doesn't make it less good.