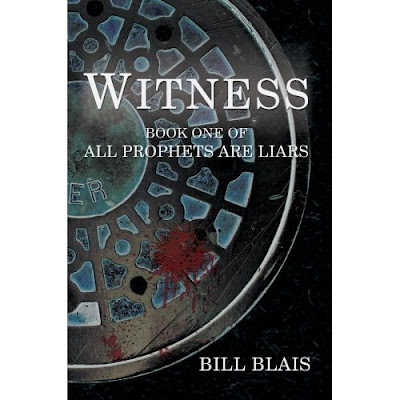 "Witness"
by Bill Blais
Format: Paperback, 312 pages
Publisher: iUniverse
"Witness" by Bill Blais is a self-published fantasy novel, first in a series named "All Prophets are Liars". The author was kind enough to send me a copy of his novel and considering the amount of work made by him I feel a bit awkward knowing the outcome of my review.
When Stephen tries to teach Rick a lesson, for dating his ex-girlfriend, Sarah, the two protagonists find themselves in the middle of a conflict between factions from a fantasy world. Stephen and Rick in their conflict kill the prophesied hero of that land and they are thrown through a portal in the Valley, the fantasy world. The two characters begin an adventure in a land ravished by civil war, with different races that fight for power and supremacy.
I have to start by saying that for the first half of the book I was lost and I didn't know what to think. Don't get me wrong, I'm a fan of epic fantasy and I don't have problems with large numbers of characters, races and places, but Bill Blais throws you in the middle of a whirlpool of characters and races. It is difficult to follow all the characters and their actions because of the great number of them. For example when Abrastus, the man that takes in Rick and Stephen, introduces his family it takes two pages to the author to finish the presentation and you are introduced to 10 or 12 family members that you rarely meet after that. Also because of that number the characters seem unreal, lacking the time to develop and unfortunately, in this category enters the main characters too.
I'm afraid that the world-building has problems too. The world build by Bill Blais has potential, with interesting races like Heccan, Hijiim, Kerosian, Narician and Skyrran, each race with its own particularities, like occupations and language, but overall the world and the races are underdeveloped. The land is insufficiently introduced and described, but that is a bit curious because the author spends a lot of time in describing places, landscapes, persons and clothes. Bill Blais shows talent in this case, using well the words and the language, but the amount of details is exaggerated. Don't get me wrong, I like to see the details of the worlds present in the fantasy works, but I think that the author should find a balance between description and world-building.
The magic system is another flaw of the novel. Even though we find magic users, magical items and enchants, the system is not explained. For example when Ptereseus uses magic he just snaps his fingers and a potion mix lights up. And the memories of his training years miss details and the information is rather scarce. On the other hand this character, Ptereseus, a Skyrran ambassador, is the one I liked the most, even though he is not fully developed either. I also liked Keeper, Finder and their pack of werewolves despite their little presence.
I have to admit that "Witness" wasn't exactly on my liking, but I think that Bill Blais has the potential for improvement and for making his next novels better.
Posted by Mihai A. at 3:43 PM

Mihai, thanks for the honest review. I'm sorry it didn't suit you better, but that's what this is all about, really, and I appreciate your being open to reading it in the first place.

Bill, thank you for the book and I'm sorry for the outcome of my review.

Good review, Mihai :) Bill's a nice guy, so I'm a little saddened that his book doesn't seem to be that great, but I'll get round to it, anyway :D

Thanks Chris :) It saddened me too, because Bill indeed is a nice guy. And it is very nice that he accepted the review as it is.