"Road of the Patriarch" by R.A. Salvatore 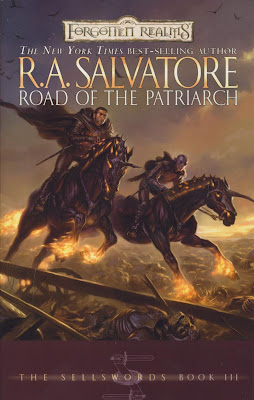 "Road of the Patriarch"
by R.A. Salvatore
Format: Paperback, 352 pages
Publisher: Wizards of the Coast
R.A. Salvatore concludes his series "The Sellswords" in "Road of the Patriarch". And I think that even though the outcome is good it could have been better.
Jarlaxle and Artemis Entreri continue their adventures in Bloodstone Lands that began in the previous novel of the series, "Promise of the Witch-King". After their contribution in the elimination of Witch-King's remnants they found themelves in the grace of the king Gareth Dragonsbane. But their actions lead them to a very different position and situation. And in the end is all about the inner feelings and thoughts.
Overall I liked the novel, but I think is a little under the expectations I had after reading "Promise of the Witch-King". The pace had slowed a little, but I think that is because "Servant of the Shard" and "Promise of the Witch-King" have a lot more action and "Road of the Patriarch" considers more the inner feelings of the characters and the consequences of their actions. So all together is not such a bad thing.
I thought that the first part of the book was a excuse for the final part. After I had finished reading the novel I was more impressed by the end rather than the beginning. And I think of the beginning not as a follow of the previous novel, but as an introduction for the outcome of this one. And at a personal level I didn't liked the Heroes of Bloodstone. I found them too good to be true, without flaws in their actions. And Riordan Parnell annoyed me with his interventions.
I prefered to start with what I think that are the weaker points of the novel, because I love the works of R.A. Salvatore and the things that I liked in "Road of the Patriarch" are many more those I didn't like. As usual in the author's works, the fighting scenes are great, imposing a sense of fluidity and speed. And even if some of the scenes go to a predictable point I couldn't wait for the outcome because that was unpredictable. For example the scene when Olwen encounters Artemis Entreri.
I loved the amusing scenes, like that of the orc courier, and I loved that the author kept the humour of some dialogues. I liked Jarlaxle as character, I liked the turmoil of Artemis Entreri and I liked that R.A. Salvatore developed this characters, going in their past and introducing their personal history. And this is available also for the new character, Athrogate. And I loved that the author reintroduces the thoughts and feelings of Drizzt Do'Urden in the beginning of each part of the novel. Those moments I enjoyed the most in the novels featuring the renegade drow elf.
In conclusion I have to say that I liked the novel, even though a little less than the previous two of the series. I liked the end of "Road of the Patriarch" and I will recommend this read if only that would be the sole good thing, but it's not the only one.
Posted by Mihai A. at 11:21 AM