"The Soulstealer War: The First Mother's Fire" by W.L. Hoffman 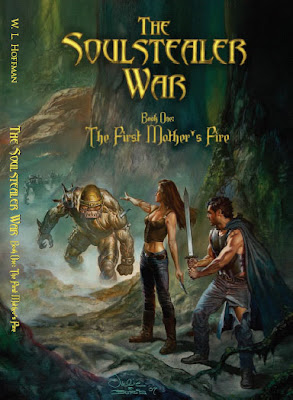 "The Soulstealer War: The First Mother's Fire"
by W.L. Hoffman
Format: Paperback, 284 pages
Publisher: Dog Ear Publishing
"The First Mother's Fire" by W.L. Hoffman is the second self-published fantasy novel that I received and this time it is more difficult for me to write the review. Despite my consideration for the author's work and for his amability in sending me a copy of his novel, I have to say that I stopped reading the book after approximately 100 pages. I usually like to finish the books I start reading, but sometimes I make exceptions. I don't think writing a review is the right thing to do, since I didn't finish the novel, but I think that an explanation for my reading interruption is normal.
So far as I read, Kenneth McNarry, a law school graduate, hikes on the Appalachian Trail trying to figure the future course of his life. Here, he is transported through a natural portal in a fantastic world, a world threaten by a magic wielder race, named Nosferu. Why I stopped here? Because I found Ken's wandering through the new land very slow and almost nothing happens for nearly half of the book. He meets Aldren, one of this land denizens, and saves him in an encounter with the Nosferu, but besides that, nothing much happens.
Beside the slow rhythm, I found Ken annoying, he is always expaining us what he sees and why that things are as they are, even the obvious ones. It will not be nothing wrong with it if the story wouldn't be written in the third person and so I got to see the same things twice, once unfold by the story and once in Ken's thoughts. Also, the main character, Ken, seems to have no fear and seems that nothing surprises him. For example, when he is transported in the new land he realizes almost instantly that he left the Earth and entered in a new world, without an obvious change of setting. Also the instant realization hits him when he finds out that he can use magic.
As I said, I usually like to finish what I read, but this time, I'm sorry to say but I will make an exception.
Posted by Mihai A. at 10:51 AM

Fantastic cover--a 2007 piece by Julie Bell & Boris Vallejo?! Artists like that are paid $$$ for rights to use their work like this, methinks. For a self-published book, uh...I have to wonder about their artwork on the book cover....

I think that Julie Bell and Boris Vallejo are one of the best artists in the world. I love to see their work. I also wondered how much would cost a cover made by them.

I meant two of the best artists :D.

That's one problem with self-published novels. The artwork though is great :)

Like all the works of Boris Vallejo and Julie Bell. I'm a big fan of them.