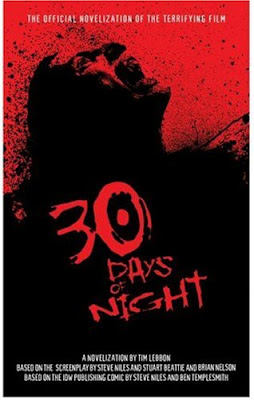 "30 Days of Night"
by Tim Lebbon
Format: Paperback, 336 pages
Publisher: Pocket Star
“30 Days of Night” is a graphic novel that was adapted in a movie. Now one more link was added to this chain, the movie novelization written by Tim Lebbon.
Barrow is the northernmost settlement in North America and the city is preparing for the usual month of darkness. The citizens of Barrow are well aware of what this month brings every year, so some of them are leaving and some of them remain in the city. What none of them knows is that this year the dark comes along with a new menace for the town of Barrow.
“30 Days of Night” by Tim Lebbon is a new kind of read for me. Because I’m used to read a novel first and after that I see the ecranization based on that particular novel. It is for the first time when I go the other way around. Also in most of the cases the ecranization seem to be no match for the novel that inspired them. But in this case the novelization made by Tim Lebbon equals and even bests the movie “30 Days of Night”.
I assume that working on a pre-established setting can be hard for the author and that can constrain the author’s imagination. But Tim Lebbon manages to write a captivating novel despite this inconveniencies and he manages to bring new elements to his novel. The novel kicks off in full action and throughout all its length the pace doesn’t drop down. Because of this steady pace and the amount of action the novel keeps the reader in alert most of the time. Also some of images created by the author have an almost visual effect that contributes to the entertainment of the reader.
Another good point of this novel is the characterization. Even though the author doesn’t go too much in depth of the characters he manages to make them likeable. The main characters benefit of description of their emotions and of the psychological aspect caught by Tim Lebbon. These aspects brought by the author on his novelization make a good contribution to the improvement of the characters of the movie. The negative characters have their share in the novel, too. Here the author doesn’t bring anything new in their construction, but it might not be his entire fault considering that he worked on a pre-set course.
Overall, although Tim Lebbon worked on a restricted level he manages to make an entertaining novel. And his novelization of “30 Days of Night” is a fun horror novel, full of action, which can stand on its own, too.
Posted by Mihai A. at 10:02 AM

i saw the movie...and it wasn`t so great..i mean, oh yes, the vampires are all over the humans from the village but the story isn`t too good from my point of view...i guess the books is way better than the movie...
and you know what?there are some comics too...and i knew that the movie was made after the comics not the book:)..i have all of them but didn`t read them yet:)...

The movie is pretty good for his genre, I enjoyed it. I liked the novel a little more. And I have to buy the comic books, because I'm really curious about them :)