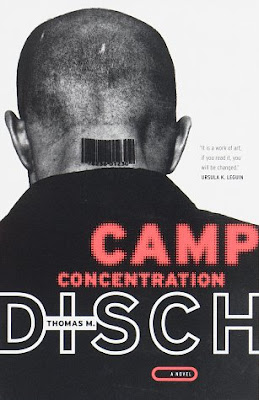 "Camp Concentration"
by Thomas M. Disch
Format: Paperback, 192 pages
Publisher: Vintage Books
Participating blogs: Adventures in Reading, Fantasy Cafe, OF Blog of the Fallen, Post-Weird Thoughts, The Reading Gaol
Larry from OF Blog of the Fallen came up some time ago with the idea of a Book Club. And the first choice for that Book Club was Thomas M. Disch’s novel “Camp Concentration”.
Louis Sacchetti, the main character, is imprisoned because he refused the draft. He is serving a sentence of five years, but after a period served in the initial prison he is transferred to Camp Archimedes. This prison, a secret military facility, is run by the General Humphrey Haast who asks Louis Sacchetti to keep a journal with his observations on the prisoners and the prison.
“Camp Concentration” is written from the perspective of Louis Sacchetti, a poet and conscientious objector, and storyline is seen through the entries that the main character makes in his journal. For the first part his journal is kept on daily basis, but after the second half of the book the entries are made as paragraphs or numbered entries and this fact contributes to the building of the atmosphere and the condense of events. Through the main character perspective I was introduced to the other characters and the plot of the novel.
Camp Archimedes is a secret military base in which the prisoners are the subjects of an experimental research. They are injected with a form syphilis which increases the intelligence of the subjects and makes them brighter. However the side effect of this process causes physical degradation and death within nine months. Thomas M. Disch deals with some of the moral and philosophical issues, such as government secret experiments, the technology development and the sacrifices made for that development and human degradation, the downfall at the hands of scientific progress and religious aspects and considerations. The plot of the novel is set in the first half of the novel, but it is much more built and developed in the second half, which is more interesting also.
The novel is written in a more intellectual and philosophical attempt of Thomas M. Disch made in the Science Fiction genre. And because of his approach it didn’t make an easy or enjoyable read. Because of the writing style it was very easy for me to lose focus on the reading and for my mind to concentrate on the novel. As a paradox although I couldn’t focus and concentrate on the novel, the minds of the characters were improved. Beside the writing style the character development is suffering and that because although is told from a first person perspective the main character just relates a series of events. The action and the drama are very much inexistent and these aspects contribute a lot in my lost of concentration. I mean that I don’t read only action packed novels, but at least something must happen to catch my attention and for me to enjoy a novel.
I believe that Thomas M. Disch’s “Camp Concentration” will not benefit from a great number of fans, from Science Fiction genre or outside it. And although is an important and valuable novel it is not what I’m looking in a reading.
Posted by Mihai A. at 11:45 AM

I think the issue of character development isn't that Disch failed to do this, but rather that it was done in a fashion that is extremely subtle and very easy to miss. Disch is playing a trick on the reader (similar to what Gene Wolfe does with Severian's narration in The Book of the New Sun series) by introducing very subtle shifts in tone and topic discussion which are meant to denote character change. It is related to that "switch" halfway through the novel that is only explicitly revealed in the final pages.

Now are my comments meant to exonerate Disch here? Not completely, as it is perfectly valid to note that on certain levels, he failed to engage you and your reasons are well-reasoned. I would just argue that the story might read better if read more as a thematic exploration of the various horrors of the 20th century in coded form than as a straight-out character piece.

Dark Wolf, I agree with you that's not the kind of book I want to read.
I'm not interested in the topic.

I enjoyed reading your review very much. It sounds as though you and I had a very similar opinion of Camp Concentration. It was interesting but since I couldn't connect with any of the characters it didn't work for me as well as it might have otherwise.

That's an interesting point you bring up. Like Dark Wolf, I had problems with the novel because the characters completely failed to engage me or make me care about what happened to them. However, there was definitely character development - more so than many of the science fiction novels published around the same time. It is very focused on what happens to Louis and his transformation, although as a reader I did still feel distanced from the characters.

Very interesting post, Dark Wolf. Like Larry, I beg to differ in the issue of characters, because I could relate to Louis Sachetti - but I would point out that maybe Disch wasn´t really interested in katharsis: after all, the late sixties were a time of experimentation, and Camp Concentration definitely has a flavor of the past that maybe cannot be recovered today - even if the political issues behind it seem to me very present-time stuff.

Thank you all very much :)

Larry - the novel made me thinking if one particular horror didn't entertain us a lot. I mean Disch makes the association between syhilis, madness and genius. As I know a number of artists throughout history were diagnosed with this desease (the national poet of Romania too) and maybe their works were affected by it. In a better or a worse way, who knows?

Kristen - it looks like we are on the same wave :) As you and Larry said it is a development in the character, but I have fail to be atracted by the character.

Fabio - it has the flavor of that time and sometimes it reminded me of George Orwell's "1984". I mean the setting and the fact that Scchetti's diary is monitored.