"Empire in Black and Gold" by Adrian Tchaikovsky 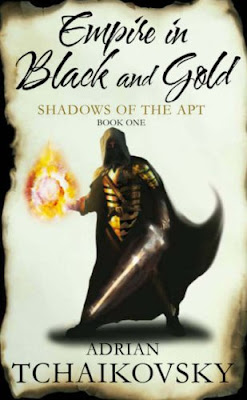 "Empire in Black and Gold"
by Adrian Tchaikovsky
Format: Paperback, 612 pages
Publisher: TOR (UK)
“Empire in Black and Gold” is the debut novel of Adrian Tchaikovsky and the first novel in the “Shadows of the Apt” series.
The Wasp-kinden managed to gather his scarce tribes under one ruler and after that they started to build their empire. City after city and region after region felt under the Empire armies. Stenwold Maker, a beetle-kinden artificer, witnessed the fall of the city of Myna and that event changed his life. After 17 years, period in which Stenwold tried to warn his compatriots about the threat of Wasp Empire, he must act together with his protégées, Che, Tynisa, Salma and Totho. All of them go to the Lowlands in a final attempt to warn the cities of Lowlands about the imminent invasion of the Wasps.
Adrian Tchaikovsky might not bring something new to a basic idea used in fantasy stories. That idea, one or more teenagers change their course of life in a dire and grim time, seems ageless and it might work her magic if used properly. But Adrian Tchaikovsky not only that uses this particular idea but he gives it a unique touch through his world-building. The author creates a very interesting world where the main inhabitants are humans, but they are not mere humans. The humans that inhabit Tchaikovsky’s world developed some characteristics from a particular insect. Therefore here the human race is divided in different kinden, the notion behind their unique characteristics drawn from a specific insect. I really loved meeting the Wasp-kinden, the Ant-kinden, the Beetle-kinden, the Mantis-kinden, the Spider-kinden and the Moth-kinden. And beside this races that come in focus I see glimpses of others kinden too and I hope that they will be further developed in the upcoming novels of the series.
Like I said every human in “Empire in Black and Gold” developed a particular characteristic based on the ability of an insect. And like I said I really liked this particular idea, but it is not the only thing that I liked on Adrian Tchaikovsky’s novel. Another aspect that I liked was the presence of different gadgets and technology in the story. The Beetle-kinden developed ability for building different machines and objects and the humans of this particular race may become master artificers. So I could see flying machines, trains and automatons and their presence add to the unique touch of the author on the story. I know that the majority of fantasy novels don’t benefit from the presence of technology, but in this case Adrian Tchaikovsky makes a good and enjoyable mix between a medieval looking world and the presence of technology.
The story is told through the different points of view. We have a great number of characters that relate the events in their lives. Because of this fact many of them will lack an in depth development, but despite of this shortcoming the author manages to make his characters enjoyable and entertaining. So even though I wasn’t drawn toward every single character I liked reading about some of them and I was attracted toward the stories of Tisamon, Achaeos, Salma and Thalric. And I will wait with pleasure to read about their future adventures.
“Empire in Black and Gold” is not entirely without flaws. The novel shows glimpses on the history of this world and I could read some references on a revolution that changed this world. However these ideas are not developed and I will certainly have liked to see them more developed. Also the humans use the Art, a method which helps them reach the characteristics of their insect kinden. I would have liked to learn more about the Art too, but this idea is also under-developed and not fully explained by the author. The rhythm of the story may slow down sometimes and the pace decreases, but it doesn’t bothered me too much. However I easily overcome all these weak points and I really enjoyed the novel and with certainty I will read the next novels of the series.
Adrian Tchaikovsky made a unique imprint through his debut novel “Empire in Black and Gold” and his novel adds a unique flavor on the fantasy genre.
Posted by Mihai A. at 12:23 PM

I bought the book last month and it rests still on my shelf.
Your review showed me that I was right to buy the book. Now I only need some time to read it.

Thank you Michael :)
And I believe that you made a good acquisition ;)

Yikes; I missed this one! Thanks for the tip!

No problem, Tia. I'm definitely wait for you to cover this debut :)