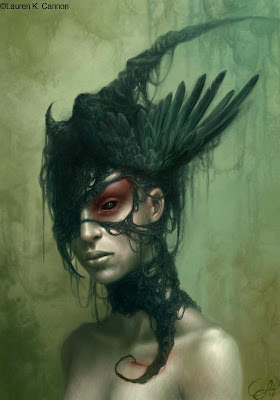 © The artwork presented on this post is used with the permission of its author. All the artwork is copyrighted. Please do not use the images without the permission of the artist or owner.
Lauren K. Cannon is a very talented artist, born in an October in a small town in New Jersey, USA. She had an overflowing imagination since childhood and she gave life to her imagination through drawing. She describes her style as surreal fantasy and she is fascinated with the beautiful, the strange and the macabre. Lauren made an amazing portrait of the main character from “The Painted Man”, the recently released novel of Peter V. Brett. Lauren also designed the wards that appear on the author’s site and that will be featured on the US cover edition of the novel, which will be released by Del Rey Books in March 2009 with the title “The Warded Man”.
Interview Lauren K. Cannon
Lauren, thank you for your amiability and the opportunity of this interview. 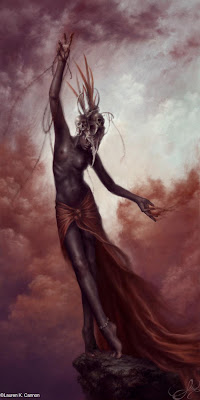 Dark Wolf: For the beginning can you, please, tell me what attracted you toward art and when did you discover your talent?
Lauren K. Cannon: I’ve always loved to draw. But I think what attracted me to fantasy art in particular was the fact that I read so many fantasy books as a child. Reading other people’s stories inspired me to start creating my own stories at a young age, and it only seemed natural I try to draw my characters. That desire to try and recreate the things I imagined on paper was something that really drove me to practice and get better. But it wasn’t until I was 16 or so that I started to consider taking art very seriously.
Dark Wolf: Is there anyone in particular who influenced your works over the years?
Lauren K. Cannon: The biggest influences have been the other artists I have met online. I first got my tablet when I was 15, and at the same time I also found my way onto a few online art forums. I met so many lovely people there--too many to name--and they’re the ones that really helped shape me develop as an artist over the years. As far as direct influences go, I’m actually much more influenced by literature than other artists. I love Grimm’s Fairy Tales, Oscar Wilde, Poe, books on metaphysics, and the work of John Campbell.
Dark Wolf: I’ve seen in your portfolio that you have works in the traditional art (acrylics, pencil) and in the digital art too. Which one do you consider to be giving you more possibilities to work with and which one do you prefer in particular?
Lauren K. Cannon: Digital is the medium I feel most free in, because it’s completely unrestrained. There are no permanent mistakes and it has allowed me to experiment and take risks I never would have taken with traditional media. But I also love acrylics. There is something very special about using real paint. Being forced to mix our own colors and commit to any choices you make without the benefit of an undo tool or fast editing options is a really important experience to have. I also do some work with pencils, but overall I prefer it as a sketching medium. In the end I love digital the most, because I think I can do things with it that are simply too difficult and time-consuming with traditional tools. 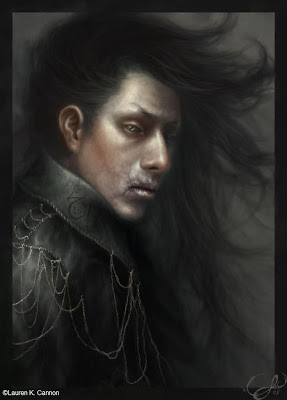 DW: Many of your works have a darker atmosphere and are inclined to macabre and grotesque. May I ask if you prefer to create a darker atmosphere and macabre and dangerous characters?
LKC: I do, yes. But I try to do it in a sort of subtle way. I have a lot of trouble sleeping, and I have weird dreams I can never remember. It’s something that’s affected my aesthetic quite a lot, in terms of how I handle disturbing and surreal elements in my images. It’s never about being dark for the sake of being dark; it's about trying to create a dream-world, another reality that’s both beautiful and unsettling.
DW: Your portfolio is consisting almost exclusively of portraits. Do you think that you have much more talent for portraits? Will you work in the near or further future on something different than portraits?
LKC: I do a lot of portraits because the characters are the most important part of the stories that drive my artwork. The face is such an expressive and unique thing, and I never get tired of trying to paint the people I see in my head. But I am trying to expand beyond portraits, for the sake of having a larger range of skill.
DW: I have to say that I’m fascinated by your portraits, but also by the little stories behind them, by their names and races. Is there more behind these portraits, I mean a world, a 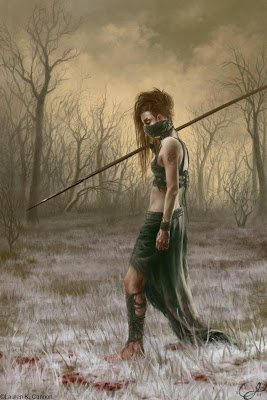 much more in depth story?
LKC: Yes, there is an extensive world behind most of my images. There are characters from the main narrative of the world, as well as many mythological characters with their own little legends. I draw from both of these in my paintings.
DW: Speaking of names and races as a personal curiosity, can you tell me what the Dhuriiehm are?
LKC: The Dhuriiehm are best described as a sect of warriors that was created by an order of mages called the Hii’rhom. They’re not a race per se, but also do not belong to any of the other races in my world. The main narrative of the story deals with the Dhuriiehm, and how they interact with and are seen by the rest of the world.

DW: Have you ever considered gathering them in a book, not only an art book, but let’s say a fantasy novel? Do you think that sometime in the future you’ll make such a project?
LKC: I would love to. Originally, when I was younger, I always thought of writing the book immediately, and drew the characters on the side. But as the years have gone by and I’ve grown more serious about art, the painting has become my focus instead. I’m trying to balance the two now, and have been revising all my old notes, trying to piece the story together more coherently. It’s going to be a long project, but it’s definitely something I’d love to see realized eventually because it’s a story that has come to mean a lot to me over the years. I’d also like to publish a collection of the little myths and legends found in the world, once I write enough of them. 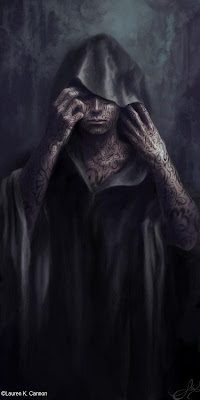 DW: Speaking of fantasy novel I’ve seen that you worked with Peter V. Brett, the author of recently released fantasy novel “The Painted Man”, on some concepts for his website. I also saw that you created the symbol featured on the US cover of the novel which will be published as “The Warded Man”. How was working on this project and what implicate this particular project? Would you like to make more book covers in the future?
LKC: The work I did for Peter V. Brett was not intended to be used for the cover, but I am thrilled the publisher chose to use it. The work I did for him was a portrait of his lead character and a series of the ward symbols that are so important to the concept of his novels. I had a great time working with him and I hope we’ll get to work together again as his series progresses. And yes, I definitely hope to do book covers in the future. Fantasy book covers are the neatest kind of covers around and it would be wonderful to be a part of the process.
DW: What the fans of your works should expect in the future?
LKC: Right now I’m pushing myself to try new things, incorporating new elements into my paintings and also experimenting more in traditional media. I’m doing a large scale pencil drawing right now, finishing up an acrylic piece, and working on some digital things. So I can’t say exactly what people should expect because I’m not sure myself where I’m going with it all. I’m just trying to become better and expand my horizons a bit. Hopefully it’ll all work out.
Thank you very much for your time and answers and I wish all the good luck :)
Thank you, it’s been a pleasure. :) 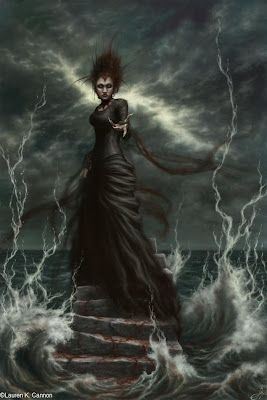 For more information about Lauren K. Cannon and for a complete portfolio of her works please visit the artist's webiste, navate.com.

awesome, i love how dark they are.

Lauren is fantastic, and great to work with. She really helped to visualize my character and the ward symbols central to the story. Almost all the designs done for the series since have been influenced by her in some way.

Hagelrat, I love that dark atmosphere too. And it looks like the portraits catch that atmosphere very well :)

Peter, it is a pleasure to see you on my blog :) And you are right, Lauren is fantastic. I hope to see more of her works as your series advances ;)

Thank you for providing this interview with Lauren K. Cannon. Lauren's artwork was great to look at, showing mastery of many elements such as fabric, human features, emotion, and landscape.

She definitely shows her talent through her portraits :)

Thank you, Liz :) Indeed she is and I'm very curious about her fantastic world ;)