"Rage of the Behemoth" edited by Jason M. Waltz 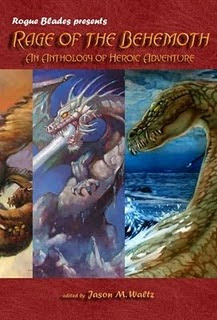 "Rage of the Behemoth"
edited by Jason M. Waltz
Format: Paperback, 354 pages
Publisher: Rogue Blades Entertainment
Review copy provided through the courtesy of the publisher, Rogue Blades Entertainment
Savage Man and Ferocious Beast. Deadly foes since the dawn of time. Where Man dares to tread, Beast has gone before. Where Beast has made its lair, Man brazenly stakes his claim. Domination is the prize. Most often in the bitter battles of bared steel and fang it is the valor of one warrior or a single powerful deed that rallies the day. Yet only the day, for another monstrous foe rises across that next ridge or in that dark night. The Beasts adopt many forms and Man comes to each in different mien: on bended knee to worship some as gods - or fear as slavering demons; upon the back of mighty steeds and waging war most divine - or defiant; in cautious companionship befriending some few - or learning to let live. Walk again the primal worlds of Lovecraft's ancient behemoths and Burroughs' untamed jungles; of London's wild North and Howard's dangerous creations. Only the brave should delve within these tales, should dare to follow close behind each warrior, for it is solely in the facing of our most awesome fears that heroes are truly made.
Throughout my readings experience I was attracted more by the ingenious characters that use the power of their mind in resolving their problems. Be they detectives, adventurers or warriors I always preferred them. I didn’t neglect the characters that use the power of their muscles in dealing with the problems and this type of hero brought a different pleasure among my readings. The latest anthology edited by Jason M. Waltz, “Rage of the Behemoth”, focuses on these heroes, but it also offers powerful opponents to measure their forces with.
When I review an anthology I usually write a story-by-story review before writing about the anthology as a hole. But I find a bit difficult to do the same with “Rage of the Behemoth”, not because I didn’t like it, but because the majority of the stories follow a same pattern, a hero or a group of heroes dealing with a fantastical creature of immense proportions. This can be a bit of a set back since in terms of conflict, man versus beast, the pattern can be stereotypical and because of this I read other things between the stories of the anthology just to change the pattern. But there is nothing much to worry, not even one story is the same with the other, offering different plots, settings and resolving of the conflict.
The anthology is structured in five sections, each one with four stories and set in a different type of setting, Frozen Wastes, Scalding Sands, Depthless Seas, Mysterious Jungles and Ageless Mountains. There is uniqueness within the sections too, each author offering a different view of the particular setting, adding an own perspective to it and therefore offering a wider view to the respective setting. Also each author makes his contribution to the general feeling of diversity through the reminiscent elements they bring in the stories, from the Vikings to the samurais and from the African deserts to the Amazonian jungles. There are some heroes that are not at their first appearance, the authors presenting a new adventure in the characters’ existence. From these characters there were a couple I would look for their other stories and two that I dream to see in other adventures although there is no clue that there will be other such adventures for them.
Besides the stereotypical pattern of the “Rage of Behemoth” that made break the reading of the anthology from time to time there were a couple of stories that didn’t work for me. Still I prefer to talk about the stories that I found the most on my liking. The best story for me was Brian Ruckley’s “Beyond the Reach of His Gods”, with a character that I liked, a very interesting journey of a Viking hero into a luxuriant jungle and with a subtle hint to religious aspects. C.L. Werner’s “The Rotten Bones Rattle” offers the only story that uses Japanese elements, with a Samurai character, Shintaro Oba, that brings in a lot of action. Bill Ward’s “The Wolf of Winter” delivers maybe the mightiest battle of all, with the strongest behemoth that the man can face, his own conscience. Lois Tilton’s “Black Diamond Sands” plays with a lot of magic in an imaginative way, with a character that I was sympathetic with and which offers in the end a battle between two titans. Last, but not least Bruce Durham’s “Yaggoth-Voor” with another appealing character for me and with a surprisingly twist in the end of the story.
Jason M. Waltz assembles an anthology that is full of frightening beasts, courageous heroes and plenty of action and fighting scenes resulted from the clash between them, making from “Rage of the Behemoth” a collection that delivers adventure in its purest form.
Posted by Mihai A. at 12:18 PM

Thanks for the review, Mihai! Delivering "adventure in its purest form" is definitely high on RBE's list. Several people agreed with your favorite story choices in the latest Preditors & Editors Readers Poll too!

I've seen that and I hoped for Brian Ruckley's story to be placed higher. I am looking forward to see more RBE anthologies :)

Very nice review, Mihai. And thanks for the kind words on my story 'Yaggoth-Voor'.

Bruce, thank you very much :)
I am looking forward to read more of your works :)

And you can - in Return of the Sword and other similarly fine texts! ;)

I thought so ;D