"Secrets of the Sands" by Leona Wisoker 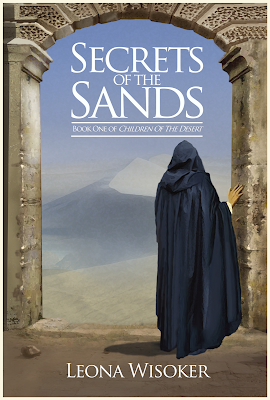 "Secrets of the Sands"
by Leona Wisoker
Format: Paperback, 442 pages
Publisher: Mercury Retrograde Press
Review copy received through the courtesy of the publisher, Mercury Retrograde Press
When Cafad Scratha was a child, someone murdered his entire family. People have questioned his sanity ever since. As the last Scratha, he's dedicated his life to catching the murderers. Now a desert lord, one of the mysterious elite of the southlands, he stands above every mundane political imperative and rule of courtesy--or so it seems until the king of the northlands tries to bring Scratha to heel. Scratha's bizarre reaction throws the independent southlands into chaos: he hands temporary control of his family lands over to the king, takes on an assumed name, and sneaks out of the city. The king sends Alyea, a young noblewoman, to hold the ceded prize: but while she understands kingdom politics, she's quickly out of her depth in the byzantine world of the southlands. What she thought was a quick ticket to power turns out to be a dangerous assignment that may well lead her to a literal dead end. Just as trapped is Idisio, the orphaned street-thief sent by a chance encounter into Scratha's service. As his new and throughly unstable master goes undercover, Idisio finds himself drawn into the mysterious world of the desert lords and their secrets. Idisio's growing comprehension of the world he's stepped into doesn't just change his beliefs; it leads him to an unsuspected truth about himself that will change his life forever.
Mercury Retrograde Press is a small and young publishing house and among its 2010 titles there is also the debut novel of Leona Wisoker, “Secrets of the Sands”, the first book in the “Children of the Desert” series.
Leona Wisoker’s novel follows two storylines closely to its end, shifting alternatively from one to another with each chapter and having in its center three characters, Cafad Scratha and Idisio, who share the same storyline since their destinies are weaved together from the early pages of the novel, and Alyea. Although the past of the main characters is only scratched at the surface, enough to give them a foundation, the three of them gain more consistency as their storyline develops. I cannot say that I attached myself to any of these characters, but they are interesting, with unique behavior and with a couple of things that are not what they seem. The secondary characters bring their contribution in the development of the “Secrets of the Sands” heroes and of the story, again none of them being what they seem to be at the first glance and not shallow in the least.
The story of “Secrets of the Sands” takes place in a world similar with a Middle East territory, geographically and culturally, but with its own features and characteristics. Leona Wisoker makes a praiseworthy work when it comes to world building, creating with care and without haste a strong world, one piece at the time. Each element has its place within the story starting with the climate, fauna and flora, urban and population characteristics, religious, economical and political aspects until legends and codes of behavior. Leona Wisoker introduces also a very interesting way of communication and also an establisher of hierarchies through different beads weaved in arm bracelets. There is an aspect rooted to this world’s history and another unique element of the story which is only introduced in “Secrets of the Sands”, but that with certainty will be developed more in the series’ next novels.
With so much attention given to the details behind the world building there is a sacrifice to be made for the novel and that is the pace. “Secrets of the Sands” moves in a slow rhythm, without many tensioned and action scenes. It offers interesting stories, a coming of age in the case of Idisio, a finding of oneself in the case of Alyea and a making of peace with his past in the case of Cafad Scratha, but not delivered in fast blood pumping pace. Like in the case of the world building the storylines are treated with care and with an attention given to the detail and not with the intention to make the reader jump from the seat in the expectance of the next scene. There is one single aspect that left me wondering of its relevance for the story, a murder mystery and another attempting murder that after it is followed for a while is discarded without any regret by Leona Wisoker only to be attended vaguely at the end of the novel again.
Leona Wisoker introduces the reader to an exotic setting in “Secrets of the Sands”, a setting with a unique flavor and that together with the story incites to a further exploration in the novels to follow.
Posted by Mihai A. at 11:56 AM

Thanks for taking the time to read and review, Mihai! We're very proud of this debut author and, like you, look forward to more from her.

I too was invited to read a review copy of this book, which I believe is scheduled for release this spring, and I agree that the world is very rich and detailed. You get the sense the author has spent quite some time there, and that this one book doesn’t begin to exploit the landscape. The unpredictability of the story also impressed me. In most novels I can too often guess where the plot will go and even what path it will take. That is not the case here. I also loved the concept surrounding the various levels of Ha’ra’ha, which was only briefly touched on. It will be interesting to see where the author takes this story.

Barbara, good luck with this title and the others of Mercury Retrograde Press. I am looking forward to the next books in the series too :)

Michael, thank you very much. I have a feeling that the next book will have some interesting adventures now that the foundation of the story is set.
Congratulations on the nice cover too :)

I saw this book here several days ago in your widget of what I am reading and the thumbnail cover struck me as interesting, so I investigated more and once I liked the excerpt, I got a pdf review copy from the nice folks at Mercury and I am reading it now and enjoying it a lot. Very entertaining so far about 1/2 in.

Liviu, I am glad you like it. It is indeed an interesting reading and I am looking forward to read more of this series. The cover is made by Michael Sullivan :)

Your review was excellent, Mihai, and the cover presents the book well. I'll be looking for this on my next book shopping expedition.

Thank you, Barbara. I am happy I had the chance to read the novel, although my copy doesn't have such a good cover as this one seen here :)