"A Matter of Blood" by Sarah Pinborough 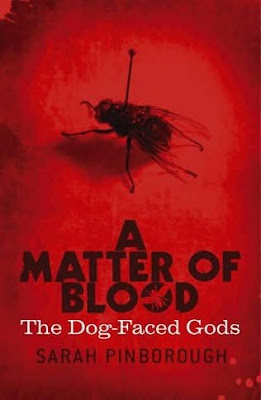 "A Matter of Blood"
by Sarah Pinborough
Format: Paperback, 432 pages
Publisher: Gollancz
Review copy received through the courtesy of the publisher, Gollancz
The recession that grips the world has left it exhausted. Crime is rising in every major city. Financial institutions across the world have collapsed, and most governments are now in debt to The Bank, a company created by the world's wealthiest men.
But Detective Inspector Cass Jones has enough on his plate without worrying about the world at large. His marriage is crumbling, he's haunted by the deeds of his past, and he's got the high-profile shooting of two schoolboys to solve - not to mention tracking down a serial killer who calls himself the Man of Flies.
Then Cass Jones' personal world is thrown into disarray when his brother shoots his own wife and child before committing suicide - leaving Cass implicated in their deaths. And when he starts seeing silent visions of his dead brother, it's time for the suspended DI to go on the hunt himself - only to discover that all three cases are linked . . .
As Jones is forced to examine his own family history, three questions keep reappearing: what disturbed his brother so badly in his final few weeks? Who are the shadowy people behind The Bank? And, most importantly, what do they want with DI Cass Jones?
On the hunt for a serial killer, vengeful DI Cass Jones uncovers a dark supernatural conspiracy!
After six horror novels, a spin-off novel in the “Torchwood” series and a novella Sarah Pinborough changes her register a little, publishing “A Matter of Blood”, a supernatural thriller.
Opening the first pages of “A Matter of Blood” the reader opens the door to a crime scene, one in a series of murders. DI Cass Jones leads the investigation of these series of crimes, but it is not his only case. He also works on the murder of two young boys, a crime that seems to be accidental at the first glance, and if these two were not enough he also has to deal with the suicide of his brother. As DI Cass Jones advances with his investigations and puts the pieces together so the reader also learns that the three cases are linked. But Sarah Pinborough manages to keep the mystery surrounding the cases and the link that draws them to a common point until the last possible moment, lifting the veil of enigma in a peak of tension, without forgetting to leave a very teasing element as the novel breaths its last page. But that is not the last breath of the author’s “Dog-Faced Gods” series, because although “A Matter of Blood” concludes the mystery of its plot and brings the cases to their conclusion, its last page leaves the reader with a question that will be answered in the next novel, or novels, of the series.
The story of “A Matter of Blood” follows DI Cass Jones and his investigation, not in an action-packed manner, but focused on the forensic and field work that is involved in such cases. Considering that the modern technology turned criminology into a science this works perfectly in this case and although the action moments are scarce Sarah Pinborough mixes a consistent mystery, a catchy setting and strong characters with supernatural elements to produce a story that moves logically and keeps the reader interested until the end. Scarce are the moments when Sarah Pinborough works on the setting of her story, but rare as they are those moments make the reader feel the surroundings. The story is set in a not too distant future, in a setting influenced and changed by the world economic crisis. The world is lead by The Bank, a mysterious and powerful financial company that impacts governments and controls the labor market, new drugs and diseases, such as the Strain II, a new, faster and merciless form of AIDS. All these elements add a new dimension to the story and create a bleak and oppressive atmosphere.
Sarah Pinborough works at the highest level with “A Matter of Blood”, but she is at her best while constructing the leading character, Cass Jones. DI Jones is haunted by his past, constrained by his present and with a future in doubt, a deeply flawed character, but entirely human. As a matter of fact there is not a single moment when Cass Jones doesn’t feel as a flesh and bone character. Facing his past he makes choices that affect his present and his relationships with those around him, steps over limits and boundaries, but has a back spine, a straight line and a personal moral conduct he follows. The way Cass Jones deals with his work and with those around him, liking or disliking people at the first glance, ignoring some and favoring others, brings him closer to the reader and makes him difficult to forget. There was a moment when I doubted Sarah Pinborough’s approach, when Cass Jones is suspended from his work, but fortunately, in the end, that proved to help the story and not another episode in this overused Hollywood cliché.
“A Matter of Blood” can be taken as a self contained story, but there are a few threads that are left hanging, leaving the door opened for the events to follow in “Dog-Faced Gods” series. If the events to follow will take the “Dog-Faced Gods” series to a new height is something to be seen in the novels to follow, but until then we have in the flesh of Cass Jones, a character who might be the person staying next to the reader as we speak, a realistic guide through the bleak atmosphere and the captivating story of Sarah Pinborough’s “A Matter of Blood”.
Posted by Mihai A. at 10:59 AM