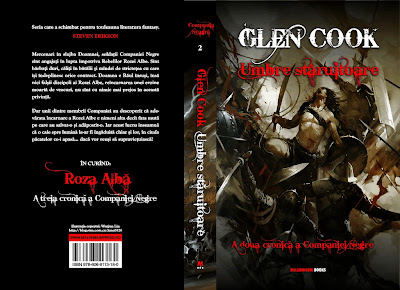 There is no need to reinforce my love for Raymond Swanland’s works, I mentioned him as one of my favorite artists in plenty of occasions. Some of his cover artworks that come to mind as soon as this subject is opened are the ones for Glen Cook’s “Black Company” titles. One such cover can be admired also on the Romanian edition of Glen Cook’s novel, “The Black Company”, released by Millennium Books. However, for the second novel in Glen Cook’s series of novels released on the Romanian market Millennium Books went for a different artwork, but similar in tone and approach to the ones made by Raymond Swanland. The respective cover is produced by Wenjun Lin, an artist unknown to me until now, but with a very interesting portfolio that can be seen here. Although the artwork featured on the Romanian edition of Glen Cook’s “Shadows Linger” was not specifically made for the cover of the book it works perfectly. It has the same composition and dynamism as the artworks produced by Raymond Swanland, but it keeps a measure of originality and personal approach. As a matter of fact, the eye can be tricked at a first glance. It is a wonderful choice.

I said before that Millennium Books’ efforts on the cover artwork of their titles are excellent and I would like to say it again. Especially since their covers bring freshness and joy on a market that seems to be complacent in a lukewarm and characterless situation when it comes to book covers.