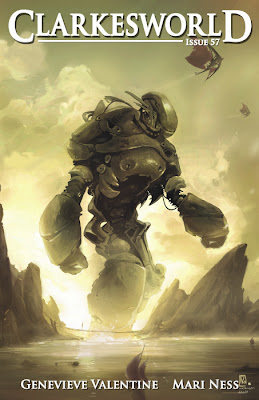 Clarkesworld Magazine, Issue 57, June 2011
“Semiramis” by Genevieve Valentine – With the world heavily affected by a global climate dramatic change, the narrator, who is the administrator of the Svalbard Seed Vault, has a personal plan besides monitoring the seed conservation. The story is set into an apocalyptic future, where the world is partially flooded, with the level of water still rising. “Semiramis” has the touch of a biblical theme, but with a definite human touch, guessed in the case of the global climate change and experienced at first hand in the case of the birds populating the Svalbard’s cliffs. The story also has a certain depressing and hopelessness feeling, accentuated by the narrator’s desires, probably never to be fulfilled, to see something he planted grow or the flowers blossom into their known colors, but which he can only imagine by looking at their seeds. Despite the fact that “Semiramis” does not have much of a plot or conflict, the reasons behind the narrator’s actions remain a mystery, after all he is a mystery himself, I really liked Genevieve Valentine’s story. It has a bitter taste and it hits too close to our day to day reality, but it is delivered with a beautiful, personal touch.
“Trickster” by Mari Ness – In a fantastical world, the hero of the story is asked by one of the gods, Trickster, to kill one of the other gods. Mari Ness creates with just a few strokes of her pen a pretty strong pantheon of thirteen gods and an equally interesting character. Mari Ness alternates the passages revealing the main storyline with those in which the protagonist reveals her knowledge about the gods. These is an effective approach since the author limits the information of the respective pantheon to the character’s knowledge, surrounding the gods with an air of uncertainty and also giving more credibility to the main character. Why the Trickster acts in this particular way and why the protagonist follows this course of action knowing quite well who she is dealing with remain questions with vague answers. However, the end of the story puts everything I learned about the gods into a new perspective and salvages a bit the storyline that failed to move me too much. Although its main storyline left me indifferent “Trickster” proved to be an interesting story in the end, with a wonderful premise, a pretty strong character and an unexpected finish.
The fiction section of this issue of Clarkesworld Magazine looks good, although I felt differently about the two stories, with “Semiramis” the stronger one, I believe that they are not totally unbalanced and offer the reader a very pleasant experience.
Posted by Mihai A. at 12:30 PM