"On a Red Station, Drifting" by Aliette de Bodard 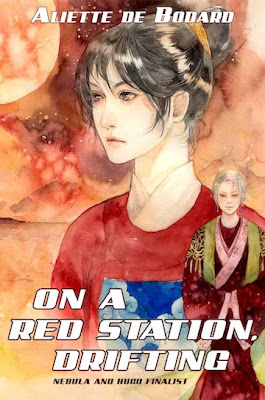 "On a Red Station, Drifting"
by Aliette de Bodard
Publisher: Immersion Press
The review is based on a bought copy of the book


For generations Prosper Station has thrived under the guidance of its Honoured Ancestress: born of a human womb, the station’s artificial intelligence has offered guidance and protection to its human relatives.
But war has come to the Dai Viet Empire. Prosper’s brightest minds have been called away to defend the Emperor; and a flood of disorientated refugees strain the station’s resources. As deprivations cause the station’s ordinary life to unravel, uncovering old grudges and tearing apart the decimated family, Station Mistress Quyen and the Honoured Ancestress struggle to keep their relatives united and safe.
What Quyen does not know is that the Honoured Ancestress herself is faltering, her mind eaten away by a disease that seems to have no cure; and that the future of the station itself might hang in the balance…

In the recent couple of years it is easy to remark Aliette de Bodard among the most important names of modern speculative fiction because of her recent works being shortlisted or winning the prestigious awards of the genre. But in the light of the recent appreciations Aliette de Bodard has received let’s not forget that even from the early days of her writing career her works have been recognized for their value. After all, how many writers can put in their CVs references such as honorable mentions in year’s bests or nominations to Nebula and BSFA Awards from their debut years?

So far, Aliette de Bodard’s published works dwell in two universes, a couple of stories and the “Obsidian and Blood” trilogy of novels, set in the Postclassical Mesoamerica, a historical noir with fantastical elements, and the rest of her short fiction set in the Xuya universe, an alternative history spanning from 1400s to the distant future. To go into specific details of the Xuya universe here will somehow evade the scope of this review, therefore I recommend a visit Aliette de Bodard’s website for all the information and stories of this alternative setting. Among those stories you will also find “On a Red Station, Drifting”, the latest exploration of the Xuya universe.

The Dai Viet Empire is at war and the rebel fighting forces push closer and closer to the heart of the empire. When the conflict zone reaches the 23rd planet Lê Thi Linh flees it and seeks refuge among her distant relatives on Prosper Station. Welcomed by the Hounoured Ancestress, the AI of the station, she is instantly disliked by her cousin and Prosper’s administrator, Lê Thi Quyen. The interaction between the two cousins gives birth to a family drama, a conflict with consequences beyond their personal lives. Two women with strong personalities bearing different connections with the past, but a similar one with the near future.

Although the Dai Viet Empire is the pinnacle of technology the past and old traditions are never forgotten and a constant presence in the everyday life of its citizens. The lineage of one family can be traced to its roots, the family ties require certain obligations according to each member’s statute. A certain examination is required for everyone around the Dai Viet Empire and failing this exam or the incapacity of reaching a higher level at the examination can throw one to a different destiny entirely. Lê Thi Linh and Lê Thi Quyen had different paths in life because of the examination, but war throw their situation in disarray, one once in power finds herself at the mercy of the other while the weaker member of the family finds herself in a position beyond her training. Linh and Quyen have their private wars, with each other, but also with themselves, one trying to reconcile with the past, the other challenged by the present.

The conflict between Linh and Quyen takes the central stage in the story and the consequences of this clash of personalities are felt all around the two. Aliette de Bodard builds these two characters with virtuosity, and while there isn’t a side I was willing to take or with whom I sympathized more, Linh and Quyen are clearly, strongly defined characters… memorable for all the right reasons. The end of their conflict and of the story is played very well too, there is nothing predictable at “On a Red Station, Drifting” and this just one more motive for Aliette de Bodard’s novella to work smoothly.

Of course, “On a Red Station, Drifting” is not all about characters. It is about a setting that feels only natural. Technology and tradition go hand in hand here without impeding each other. Aliette de Bodard reaches the perfect balance for the two, blends them to the maximum effect and creates a world that brings both the amazement of a new discovery and the sense of intimate familiarity for the reader. The language is another fundamental piece of the novella found in almost perfect equilibrium, sometimes simple, sometimes with poetical quality to the point of the actual verses being born on the pages on the book. Sensible or hardened, vulnerable or firm when needed.

There is little surprise in the recent wave of recognition Aliette de Bodard receives for her works, as seen in “On a Red Station, Drifting” every little sign of esteem this amazing writer gets is deserved in the fullest. The next natural step would be a majestic tome gathering all Aliette de Bodard’s short fiction, “On a Red Station, Drifting” included, for the readers to enjoy and value. Adorned with an equally grand cover artwork and not the unfortunate choice we can see on the hardcover limited edition of this novella.
Posted by Mihai A. at 12:30 PM