"The Alchemy of Stone" by Ekaterina Sedia 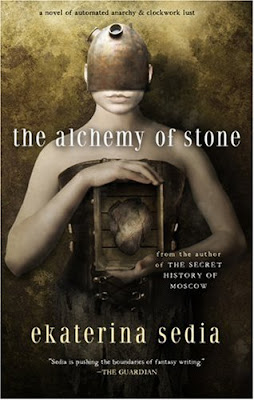 "The Alchemy of Stone"
by Ekaterina Sedia
Format: Paperback, 304 pages
Publisher: Prime Books
Mattie, an intelligent automaton skilled in the use of alchemy, finds herself caught in the middle of a conflict between gargoyles, the Mechanics, and the Alchemists. With the old order quickly giving way to the new, Mattie discovers powerful and dangerous secrets - secrets that can completely alter the balance of power in the city of Ayona. However, this doesn't sit well with Loharri, the Mechanic who created Mattie and still has the key to her heart - literally!
The last book I finished last year was Ekaterina Sedia’s “The Secret History of Moscow” and that was a very good conclusion for a reading year. But nothing in the reading of the Ekaterina Sedia’s second novel prepared me for her next published work, “The Alchemy of Stone”.
If in “The Secret History of Moscow” Ekaterina Sedia locates her story in our world and in a real city adding it fantastical elements, in “The Alchemy of Stone” locates the story in a world and a city built from scratch. And here the author doesn’t hold anything back, developing through vivid imagination and powerful visions a wonderful world. With reach elements of speculative fiction the world of “The Alchemy of Stone” and its story will feel like a dream, a strange but beautiful dream. With elements of steampunk, science fiction, fantasy and why not, horror, but not played in the usual way, the novel will be hard to be set in a particular genre, but will create a unique setting.
On this setting the story will develop, followed from two perspectives one of Mattie’s, the intelligent automaton, and of gargoyles’, the builders and the protective of the city. From these perspectives the story will begin to branch out in a few directions and explores the conflicts of each direction. But these conflicts are not only building the story and action of the novel, but are as many philosophical themes of human conditions and emotions lived by a human being. Although lived and seen by Mattie, an automaton, every single emotion can be found in humans. The pages of the novel engulf themes and emotions such as discrimination (racial and sexual), freedom, adaptation, a sense of belonging, love, death and the list can go on. Also with a political conflict, between the two factions of the city, The Mechanics and The Alchemists, the story goes deeper in the panoply of emotions offering new elements such as progress and its costs, a conflict between the logical minds and the more romantic ones, between the old and the new, a struggle for power.
All these are the ingredients used by Ekaterina Sedia in the creation of a beautiful novel. I enjoyed turning each page and discovering the outcome of the conflicts of the novel. However, there are elements in the story which attracted me a lot, but felt a bit disappointed for them not being just a bit more developed. For instance, the element that left me wanting more was the Soul Smoker. I found this idea very imaginative and the story of Ilmarekh, the Soul Smoker very interesting, but I certainly would have liked to learn and see more of him. Besides this aspect, there are a couple more as imaginative as the Soul Smoker, but which left me with the same desire to see more, such as the alchemy process, the Stone Monks or the spider miners. And although I felt on a few moments that the action is dragging, not a single one of these aspects made me enjoy less “The Alchemy of Stone”.
I liked my first encounter with Ekaterina Sedia’s works made through “The Secret History of Moscow”, but I found my second meeting with her works to be even better. “The Alchemy of Stone” is not only a very good and beautiful novel, but it is also a confirmation that Ekaterina Sedia is a very imaginative and talented writer. And I can honestly say that she became one of my favorite authors.
Posted by Mihai A. at 12:00 PM

I thought The Secret History of Moscom was only okay. I found The Alchemy of Stone entrancing. She created one of the best clockpunk characters so far with Mattie.

Loved the book too

Mad Hatter, I liked "The Secret History of Moscow" too. That one is a lovely story as well, although I find "The Alchemy of Stone" better :)

Liviu, thank you for the recommendation. I'll look for that one on my next buying :)

it`s a good book but for me it was far from an enthusiastic read..

I`m in search of different things in books and The Alchemy quite didn`t make out for me...

Bogdan, it really worked its magic on me :)

A thorough review, Mihai, that has compelled me to place it upon my TBR list.

Barbara, thank you very much :)
I highly recommend this novel.

Great review! So I'm not the only one who liked The Alchemy Stone more than The Secret History of Moscow.

I agree with Liviu that you have to try Clockwork Heart by Dru Pagliasotti.
My two cents in two sentences:
Two men, even brothers, struggle for one woman in a steampunk world including sleuth.
This isn't a fast pace story. But it contains action, romance and a good world building.

Michael, thank you. And thank you for the recommendation too. I should check "Clockwork Heart" someday :)