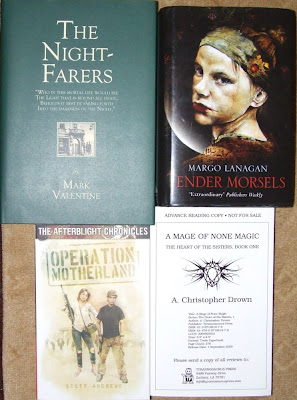 Here are the last arrivals in the mail before my vacation starts:

- "The Nightfarers" by Mark Valentine (through the courtesy of Ex Occidente Press);

To find the “light of lights”, you must first know the darkness of night, said the 17th century German mystic Angelus Silesius. It is a truth found by all the characters in Mark Valentine’s new full collection of stories since Masques & Citadels. Carden, the quester after lost languages, finds there are some things that cannot be named. The narrator in "The Seer of Trieste" finds the old city harbours an image that has pervaded the most advanced literature of our time, while the strange and tragic secrets of another liminal city are explored in "The Seven Treasures of Bucharest". The voyages of "The White Sea Company" seem to sail beyond any mortal shore, while the smouldering sunrise in "The Dawn at Tzern" brings different illuminations to a priest, a postmaster, a prophet and a soldier. In "Their Dark & Starry Mirrors", a blind Moorish poet receives messages from the Master of Night. In "Undergrowth" a searcher after rare works finds it is possible to get truly lost in books, and in "White Pages" we learn that even blank books have their secrets. And which author should have won "The 1909 Proserpine Prize" for dark literature – Blackwood, Shiel, Hodgson, Stoker, Marjorie Bowen – or another ? As well as these tales, two more curious pieces appear: "The English Leopard" eavesdrops on a conversation about a great lost heraldic beast, while "The Left Temple" provides six startling experiments in evoking the rites of dusk. The author of The Connoisseur stories and editor of Wormwood offers a book of wonder, where neither light nor shadow are ever all they seem. Two years in the making, The Nightfarers is not only the most eclectic and exquisite Mark Valentine collection to date but also his finest. We here at Ex Occidente Press trust this is one of the very few contemporary masterpieces of the weird and the fantastic.

- "Tender Morsels" by Margo Lanagan (through the courtesy of David Fickling Books);

Liga endures unspeakable cruelties at the hands of her father, before being magically granted her own personal heaven, a safe haven from the real world. She raises her two daughters in this alternate reality, and they grow up protected from the violence that once harmed their mother. But the real world cannot be denied forever . . .
Magicked men and wild bears break down the borders of Liga’s refuge. Now, having known Heaven, how will these three women survive in a world where beauty and brutality lie side by side?
- "Operation Motherland" by Scott Andrews (through the courtesy of Abaddon Books);

Lee Keegan travels to Iraq on the trail of his missing father, only to find himself caught between desperate rebels and a general who wants to strap him into an electric chair. In England, Jane Crowther, one time matron of St Mark's School for Boys, attracts the wrong kind of attention and has to fight to protect her new school from unlikely enemies. And in a bunker underneath Washington, a madman issues orders that will tip two devastated countries into total war.
This is the first year of St Mark's School for Boys and Girls. It will be a miracle if it sees a second!
- "A Mage of None Magic" by A. Christopher Drown (through the courtesy of A. Christopher Drown).

Folklore tells how magic came to be when evil gods shattered the great, fabled gem known as the Heart of the Sisters. Those same stories speak of one day the Heart being healed and unleashing a power that will bring the end of humankind.
While traveling to begin his magical studies, young apprentice Niel suddenly finds himself at the center of the Heart’s terrifying legend. Caught in a whirlwind of events that fractures the foundation of everything he’s believed, Niel learns his role in the world may be far more important than he ever could have imagined, or ever would have wished.
A Mage of None Magic begins an extraordinary adventure into a perilous land where autocratic magicians manipulate an idle aristocracy, where common academia struggles for validation, and where after ages of disregard the mythical finally refuses to be ignored any longer.
Thank you all very much!
Posted by Mihai A. at 5:15 PM

Too bad the only book I've ever ordered from Ex Occidente Press never arrived in the mail (something I recently posted about on SFJ)! I'm going to have to find a way to get hold of some of the stuff they publish!

Have a good vacation!

i envy you for that margo lanagan... i've got my eyes on it for a while now, but i'm waiting for it to be out in paperback.

Ben, I am sorry to hear that. It happened to me too. I had some packages that didn't arrived and the postal service didn't know anything about them. Maybe all the postal services have some leaks in the system :)

Jen, I thought so. I am glad that I have this edition, because I love the cover art. And I am very eager to see what started the controversies around Margo Lanagan's works :)

The Nightfarers looks like a book i'd read right off.