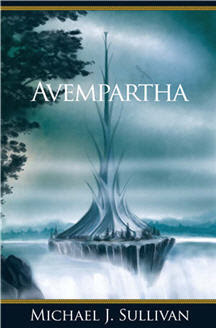 "Avempartha"
by Michael J. Sullivan
Format: Paperback, 344 pages
Publisher: Ridan Publishing
When a destitute young woman hires two thieves to help save her remote village from nocturnal attacks, they are drawn into the schemes of the wizard Esrahaddon. While Royce struggles to breech the secrets of an ancient elven tower, Hadrian attempts to rally the villagers to defend themselves against the unseen killer. What begins with the simple theft of a sword places the two thieves at the center of a firestorm — that could change the future of Elan.
If you ask me which is the book that took me by surprise the most this year I would easily answer, “The Crown Conspiracy”. So after being pleasantly surprised by “The Crown Conspiracy” and after enjoying a lovely reading I went as fast as I could for the second novel in the Michael J. Sullivan’s “The Riyria Revelations” series, “Avempartha”.
“Avempartha” starts pretty much in the same way as “The Crown Conspiracy”, with a mission for the two main characters, Royce Melborn and Hadrian Blackwater, and which is basically the same, to steal one particular sword. However, different from the first novel, “Avempartha” is not offering as many action scenes, but this will not be a drop in the enjoyment of the book. And that is because this aspect is compensated by the development in the depth of the characters, world, history and politics. I was happy to find that with every page the world of Elan, where the action of the series is taking place, became richer and richer and that the characters I loved became stronger and stronger.
Michael J. Sullivan fills the ground of his fantasy world further on in “Avempartha” using conversations and scenes of this novel to reveal further on the history and the customs of his created land, none of them coming to bore the reader, but in a natural way and following a logical course. What I loved even more are the politics and the machinations present throughout the story. There are ambitions and interests put into play, with interesting characters trying to achieve those ambitions and interests. In the world of Elan besides the human characters there are a few non-human presences, one of them only guessed, but present nonetheless. But the author manages to use these characters with success avoiding the trap of the clichés that accompany such presences.
My top pleasure in this reading is once again the meeting with the two main characters. Royce Melborn and Hadrian Blackwater prove once again to be attractive characters and their relationship offered me again the chance to read new delightful dialogues. There are less such dialogues than in the previous novel, but this is due to the fact that most of the time the two characters are not caught in the same location, so it is understandable. Like the world they live in Royce and Hadrian benefit from further development, Michael Sullivan not only continuing to build his characters, but offering a few surprises along the way and teasing us with new secrets which await their veil to be cast away. There is also another character that I began to like, Esrahaddon, and I am certain that I will see more of him in the next novels of the series.
Like I said there are fewer action scenes, but that it is not necessarily a bad thing. However, there are some minor aspects and outcomes that just seem a bit too convenient. Also, two or three scenes are a bit dramatic and seem reaped from a Hollywood movie, with a conversation that is not quite proper for that particular moment. What is encouraging though is that these aspects are very few and if I were not to write this review I don’t believe I would have mentioned in a conversation about the book.
“Avempartha” is the second novel in “The Riyria Revelations”, but like the previous novel, “The Crown Conspiracy”, can as easily be read as a standalone. Also both novels offer a delightful reading, captivating adventures and a very interesting author. I am certain that I will hear more of Michael J. Sullivan in the future.
Posted by Mihai A. at 12:04 PM

Thanks for the review!

I liked the first one, and haven't read the second one but heard it's good. My fiance on the other hand read the first one and didn't enjoy the experience as much as I did. He didn't hate it he just wasn't as into it.

What I liked is it seemed a quick nice read, and so many fantasy books today are so complicated (At times not a bad thing).

Enough of my rambles :)

You beat by a few hours in posting your review of this one!

Cindy, both books offer a quick and very pleasant reading. And both are very refreshing. As for not being on everyone's liking, I would worry if it is :)

Ben, I am heading there to read yours :)

Great review! And it is not the first one who praise Michael J Sullivan's books.
Both books are on my to buy list for December.

Michael, thank you. These are very good books and Michael Sullivan deserves the praise he receives. I hope you'll like the books when you get them :)

Thank you very much, Barbara :)