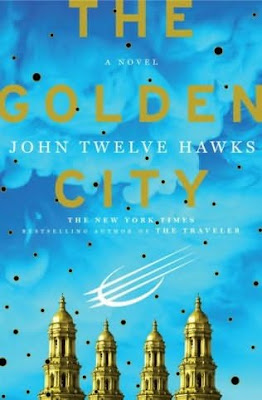 Before starting my blog one of the series I discovered through the blogosphere and otherwise I don't believe I would have found was John Twelve Hawks' “Fourth Realm”. Two years ago I won a contest which has as prize a copy of John Twelve Hawks’ novel, “The Dark River” and that led me to his series, “Fourth Realm”. With some very interesting reviews for his novels, “The Traveler” and “The Dark River”, my interest was caught pretty quickly and the reading of the two novels was more than satisfying. A cross between thriller and fantasy John Twelve Hawks’ novels are very interesting and make a very disturbing dystopian. “The Dark River” left me in an eager wait for the outcome of the story and now I am glad to find that my wait is almost over. In September Random House will publish the third novel of the series, “The Golden City”, one which promises many interesting things.
A world that exists in the shadow of our own . . . the thrilling conclusion to John Twelve Hawks's Fourth Realm trilogy, The Golden City is packed with the knife-edge tension, intriguing characters, and startling plot twists that made The Traveler and The Dark River international hits.
John Twelve Hawks's previous novels about the mystical Travelers and the Brethren, their ruthless enemies, generated an extraordinary following around the world. The Washington Post wrote that The Traveler “portrays a Big Brother with powers far beyond anything Orwell could imagine . . .” and Publishers Weekly hailed the series as “a saga that's part A Wrinkle in Time, part The Matrix and part Kurosawa epic.” Internet chat rooms and blogs have overflowed with speculation about the final destiny of the richly imagined characters fighting an epic battle beneath the surface of our modern world.
In The Golden City, Twelve Hawks delivers the climax to his spellbinding epic. Struggling to protect the legacy of his Traveler father, Gabriel faces troubling new questions and relentless threats. His brother Michael, now firmly allied with the enemy, pursues his ambition to wrest power from Nathan Boone, the calculating leader of the Brethren. And Maya, the Harlequin warrior pledged to protect Gabriel at all costs, is forced to make a choice that will change her life forever.
A riveting blend of high-tech thriller and fast-paced adventure, The Golden City will delight Twelve Hawks's many fans and attract a new audience to the entire trilogy.
Posted by Mihai A. at 12:05 PM

Like you, I'm looking forward to this book. I want to know what happens to Maya!

This is one of my most hotly anticipated books of the year. I love the first book. The second was a little predictable, but I think Hawks will pull it out.

Adele, it is quite funky ;)

Nora, me too! Also I want to know what happens to Gabriel :)

Mad Hatter, the second was a bit weaker than the first one, but interesting and intriguing nonetheless :)