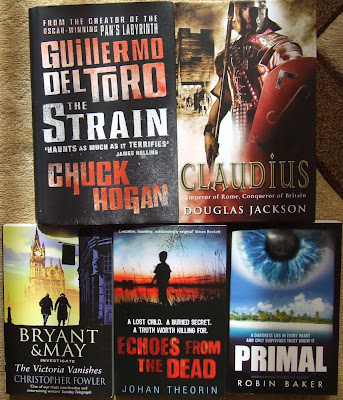 Once again here are my latest arrivals in my mailbox. A few of them are from different genres, but they are interesting and are appealing to me nonetheless.
- "The Strain" by Chuck Hogan & Guillermo del Toro (through the courtesy of Haper Collins UK);
A plane lands at JFK and mysteriously ‘goes dark’, stopping in the middle of the runway for no apparent reason, all lights off, all doors sealed. The pilots cannot be raised. When the hatch above the wing finally clicks open, it soon becomes clear that everyone on board is dead – although there is no sign of any trauma or struggle. Ephraim Goodweather and his team from the Center for Disease Control must work quickly to establish the cause of this strange ocurrence before panic spreads. The first thing they discover is that four of the victims are actually still alive. But that’s the only good news. And when all two hundred corpses disappear from various morgues around the city on the same night, things very rapidly get worse. Soon Eph and a small band of helpers will find themselves battling to protect not only their own loved ones, but the whole city, against an ancient threat to humanity.
- "Claudius" by Douglas Jackson (through the courtesy of Transworld Books);
The year is 43AD . . .
In Southern England, Caratacus, war chief of the Britons, watches from a hilltop as the scarlet cloaks of the Roman legions spread across his lands like blood.
In Rome, Emperor Claudius, newly risen to the imperial throne, dreams of taking his place in history alongside his illustrious forebears Caesar and Augustus.
Among the legions marches Rufus, keeper of the Emperor’s elephant. War is coming and the united tribes of Britain will make a desperate stand against the might of Rome. The Emperor has a very special place for Rufus and his elephant in the midst of the battle – as a secret weapon to cow the Britons with the visible manifestation of Rome’s power.
- "The Victoria Vanishes" by Christopher Fowler (through the courtesy of Transworld Books);
One night, Arthur Bryant witnesses a drunk middle-aged lady coming out of a pub in a London backstreet. The next morning, she is found dead at the exact spot where their paths crossed. Even more disturbing, the pub has vanished. Bryant is convinced that he saw them as they were over a century before, but the elderly detective has already lost the funeral urn of an old friend. Could he be losing his mind as well?
Then it becomes clear that a number of women have met their ends in London pubs. It seems a silent, secret killer is at work, striking in full view...and yet nobody has a clue how, or why - or where he’ll attack next. The likeliest suspect seems to be a mental patient with a reason for killing. But knowing who the killer is and catching him are two very different propositions.
As their new team at the Peculiar Crimes Unit goes in search of a madman, the octogenarian detectives ready themselves for the pub crawl of a lifetime, and come face to face with their own mortality…
- "Echoes from the Dead" by Johan Theorin (through the courtesy of Transworld Books);
Can you ever come to terms with a missing child? Julia Davidsson has not. Her five-year-old son disappeared twenty years previously on the Swedish island of Oland. No trace of him has ever been found.
Until his shoe arrives in the post. It has been sent to Julia's father, a retired sea-captain still living on the island. Soon he and Julia are piecing together fragments of the past: fragments that point inexorably to a local man called Nils Kant, known to delight in the pain of others. But Nils Kant died during the 1960s. So who is the stranger seen wandering across the fields as darkness falls?
It soon becomes clear that someone wants to stop Julia’s search for the truth. And that he’s much, much closer than she thinks . . .
- "Primal" by Robin Baker (through the courtesy of Virgin Books).
Presumed dead, a group of undergraduate students who go missing on a deserted Pacific island emerge one year later in two groups of ragged (and naked) survivors. All but one of the surviving women are pregnant, and two students, plus their professor, are said to have died. More disturbingly, a child that was born on the island to one of the girls has perished too. In the glare of the world’s media, every survivor sticks to the same unconvincing version of events.
Piece-by-piece the narrator examines the evidence and conducts interviews with the survivors, to work out exactly what happened on the island during that year. Slowly, a terrifying picture emerges of feral human beings stripped of dignity and resorting to the behaviour of warring primates. Rivalry and sexual tension leads to division, tribalism, perversion, rape, baby-snatching, and eventually murder ... a Lord of the Flies scenario for adults, proving the dead professor’s theory that human beings are no different from chimpanzees in the wild.
Thank you all very much.
Posted by Mihai A. at 12:01 PM

The Victoria Vanishes sounds just like my kind of book, Mihai.

I like to read detective stories from time to time :)