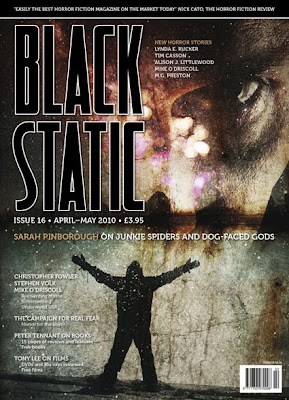 "Black Static"
Issue 16 - April/May 2010
Publisher: TTA Press
Review copy received through the courtesy of the publisher, TTA Press
I am more attracted by the long fiction than the shorter form and because of my preference the collections of stories take a little longer to read. However, when I feel the need for a quick reading in the shorter form of fiction the magazines provide a great source of stories and a very pleasant way to find new interesting writers. This time was the turn of the 16th issue of Black Static to find its way on my reading table.
Taking the non-fiction into account Black Static opens with the usual two pages column of news and information, “White Noise”. Browsing through the pages of the issue 16 we can find the excellent Tony Lee’s “Blood Spectrum”, the always informative and funny reviews of the latest DVD/Blu-ray releases, and Peter Tennant’s “Case Notes”, covering book reviews and featuring this issue an interview with Sarah Pinborough. Also in this issue of Black Static Stephen Volk talks in “Electric Darkness” about the state of a modern script writer, Mike O’Driscoll takes a look on “Night’s Plutonian Shore” at James Ellroy’s “Underworld USA” series and Christopher Fowler analyzes the situation of today’s horror, throwing a doubtful eye on the rise of Paranormal Romance.
As for the fiction section of Black Static #16 we can find the following 5 short stories:
“The Overseer” by Tim Casson – The story makes a strong start for the magazine, being the best one from the five published in this issue. It is a story of a young man who enjoyed his father’s wealth, but who failed to listen to his father’s advice and finds himself struggling for survival after the collapse of the stock market. Tim Casson creates an excellent atmosphere, oppressing and disturbing, materialized in the poor accommodation where Darius, the young man, lives, the way the day workers are chosen, with a spit on their feet, and especially in the factory where the main character finds work. With an overtake on the Egyptian mythology the story offers a couple of small ironies, but also involves a mask with a curse on itself. Although I didn’t engage with the character in the fullest the story is quite interesting.
“Extreme Latitude” by M.G. Preston – The action of this story takes place in an Arctic research station set in Longyearbyen, Svalbard. The story is told in a series of journal entires and through these entries we can see the story develop and the decrease in the mental sanity of the main character. Because of the isolation of the station, but also of a self-imposed solitude, a series of personal memories and a few strange events the character of the story falls into madness ending up in violent acts. M.G. Preston follows well the falling of his character, but a few of the memories involved in the story are rather ambiguous and they fall short of forming a solid reason for the character’s loss of mental sanity. However, the extreme location and position constitute enough reason for that and make the story work on an entertaining level.
“One Last Wild Waltz” by Mike O’Driscoll – Mike O’Driscoll takes the stage of the fiction section too, after the non-fiction I’ve mentioned earlier, “Night’s Plutonian Shore”. Returning home for his brother funeral the main character of the story faces his childhood house and memories, rediscovering old places and people. It is a story strongly inclined on the psychological side, following the emotions through which the character passes at his return home. The memories of his childhood and of his relationship with his brother throw a bitter feeling on the story and making the character a sympathetic one. The story would have been stronger in my opinion without the presence of the mysterious snowmen and their involvement. Although their presence is related to the reconnection of the character with his roots they rather take away from the strong psychological aspect of the story.
“The Empty Spaces” by Alison J. Littlewood – Two widowers visit a doctor when one of them starts seeing his dead wife and find out that the mind tries to fill the empty gap left by the loss of vision. Another psychological approach for a story of this issue. The story feels stronger though, because Alison J. Littlewood keeps everything at the mental level without involving unnecessary elements, instead bringing forth feelings such as regret, remorse, but also a strong desire to live. She adds a tragic event in the story and although this one remains a mystery in the most part there are enough hints to make “The Empty Spaces” stronger.
“The Moon Will Look Strange” by Lynda E. Rucker – Following the death of his daughter the main character runs as far away as he can from his home. Lynda E. Rucker explores the emotional breakdown suffered by the story’s character, obsessed by images of his daughter and ending up neglecting himself. Told from the first person perspective unfortunately this character doesn’t have enough power and failed to engage me in his tragedy. The story engages with occult elements too, but the end is predictable and rather unsatisfactory. Lynda E. Rucker’s story is not a bad one, but considering the other four story of this issue it falls behind them.
As I said I am not the biggest fan of the short fiction, but it is nice from time to time to explore short stories. And although this time I didn’t find a small treasure in the form of a short story, as it happened to me before, the 16th issue of Black Static offers an enjoyable and entertaining reason for the search of one.
Posted by Mihai A. at 12:00 PM