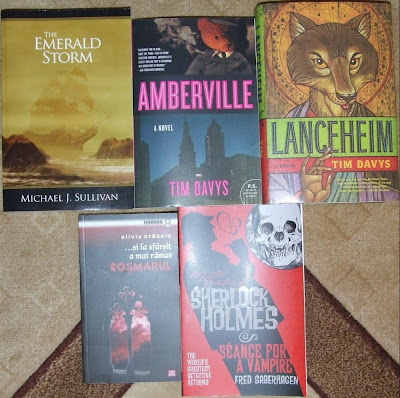 After a couple of hectic weeks I am back at my usual schedule, starting with a post about my latest arrivals in the mailbox. Among them I have the first review copy sent by a Romanian publisher, the debut novel of Oliviu Crâznic, “… și la sfârșit a mai rămas coșmarul” (… and at the end remained the nightmare):
- "The Emerald Storm" by Michael J. Sullivan (through the courtesy of Robin Sullivan);
Ex-mercenary Hadrian Blackwater sets course on a high seas adventure to find the lost Heir of Novron. His only hope lies in confronting the ruthless and cunning Merrick Maruis. Fearing Hadrian is not up to the challenge, Royce Melborn joins his ex-partner for one last mission. Their journey finds them adrift amid treachery and betrayals forcing Hadrian to face a past he hoped never to see again.
- "Amberville" by Tim Davys (through the courtesy of Harper Collins);
What does it mean to be bad?
Eric Bear has it all: a successful career, a beautiful wife, a blissful home. He knows he's been lucky; a while back, his life revolved around drugs, gambling, a gang of stuffed-animal thugs, and notorious crime boss Nicholas Dove.
But the past isn't as far away as Eric had hoped. Rumors are swirling that Dove is on the Death List and that he wants Eric to save him. If Eric fails to act, his beloved wife, Emma Rabbit, will be torn apart, limb from limb, and reduced to stuffing.
- "Lanceheim" by Tim Davys (through the courtesy of Harper Collins);
While finishing what was to be his greatest symphony, famed composer Reuben Walrus discovers he is going deaf. Desperate to stave off the encroaching silence, he embarks on an odyssey to find a fabled creature named Maximilian, rumored to have healing powers but only traceable via an underground network. But as Reuben gets closer to the truth, he must ask himself: Just who—or what—is Maximilian?
The story of the legendary creature is recorded by Wolf Diaz, Maximilian's oldest friend and most loyal follower. Oddly, unlike the other stuffed animals of Mollisan Town, Maximilian did not arrive by green delivery truck. He cannot be identified as any particular species and is made from a material unlike any other with almost invisible seams. And most puzzling, he grows in size. As Maximilian matures, he begins to preach odd parables, attracting a legion of followers hoping to learn from his teachings. But his believers aren't the only stuffed animals paying attention as his growing influence threatens the power of the darker forces currently ruling Mollisan Town. Now Maximilian is in hiding . . . and time is running out for Reuben to find him. As his search widens, the composer encounters a detective mouse, a giraffe who swears Maximilian miraculously cured his stomach cancer, and a mink who may hold the key to Reuben's salvation. But it's a race against time as Reuben's world steadily goes silent, and his desperation may ultimately lead to his undoing.
- "… și la sfârșit a mai rămas coșmarul" (… and at the end remained the nightmare) by Oliviu Crâznic (through the courtesy of Vremea Publishing);
Invited to a stranger’s wedding in a castle haunted by the devil, the fallen noble Arthur de Seragens finds himself caught in a terrible web of madness, betrayal and crime. While the guests die around him one by one in a mysterious way, cut down by an inhuman enemy, Arthur witnesses with horror at the noose getting tighter around the only person he cared about, the gorgeous Adrianna de Valois, the young daughter of the dark and feared chief of Police. Panicked and confused, Arthur is forced to make a fragile and controversial alliance with the strongest of the survivors, who already began together an investigation in the dark, but suspecting each other: the Viscount of Vincennes, Arthur’s childhood friend, versed in the saloon intrigues, logician and skillful hunter; the German Baron Von Walter the Traveler, who’s wanders through places forgotten by the world brought him face to face with unbearable truths; the beautiful and immoral Giulianna Sellini, who is said to have seduced the God and the Devil at the same time; the ex-priest Huguet de Castelnove, now a dangerous swordsman, with a road strewn with bodies behind him that leads to a mysterious mistress; the Duke of Chalais, the strong and cruel master of the land, refined, handsome and unable to abstain from his violent bursts; and, especially, the man who leads the investigation and who is feared by all, because one word from him can bring the stake – Albert de Guy, the Inquisitor…
- "Seance for a Vampire: Further Adventures of Sherlock Holmes" by Fred Saberhagen (through the courtesy of Titan Books).
When two suspect psychics offer Ambrose Altamont and his wife the opportunity to contact their recently deceased daughter, the wealthy British aristocrat wastes no time in hiring Sherlock Holmes to expose their hoax. He arranges for the celebrated detective and Dr Watson to attend the family's next seance, confident in Holmes's rationalist outlook on the situation. But what starts as cruel mockery becomes deadly reality when young, beautiful Louisa Altamont appears to her parents in the flesh as one of the nosferatu a vampire! The resulting chaos leaves one of the fraudulent spiritualists dead, Sherlock Holmes missing and Dr Watson alone and mystified. With time running out, Watson has no choice but to summon the only one who might be able to help Holmes's vampire cousin, Prince Dracula. Alternately narrated by Watson and the charismatic Dracula himself, Sance for a Vampire demonstrates that heroes are sometimes found in the most unlikely places. Saberhagen has recast Bram Stoker's paragon of evil into a noble, witty and chillingly powerful character.
Thank you all very much!
Posted by Mihai A. at 2:00 PM

I am just finishing up reading Lanceheim, and have Amberville in my library queue. The premise of stuffed animals running around in a pseudo-real world setting intrigued me, though the story has played out at all like I expected. That may be a good thing, in the end.

I read Oliviu Craznic's gothic novel, ...And at the end remained the nightmare, and it was a very entertaining book. The dark atmosphere, the references to the Inquistion's archive I found at the end of the book alongside with some intriguing real mysteries, the well-constructed characters, all made this book worth reading. I am glad we have this here in Romania!

Rabid Fox, the premise of stuffed animals having their own world is quite appealing. I hope to get a chance to read these novels pretty soon :)

Adina, it is good to have some horror authors in Romania, because we have a lack of such authors. I'll read Oliviu Craznic's novel this summer and review it here on my blog :)

thank you dark wolf from all the romanian horror fans, we expect your article with a lot of interest. you have a wonderful blog, keep it so! i will try the sherlock holmes book also i suppose, though it seems a little forced, maybe you can say something about it too...(hope not to ask too much... iam curious and i am a holmes fan...)
thanks and good luck further!

Thank you very much, Adina! You are very kind :)