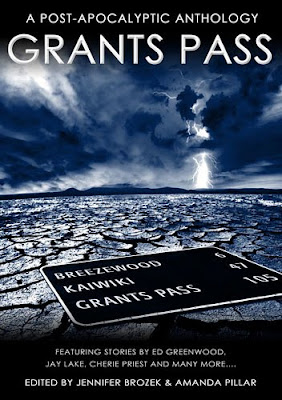 "Grants Pass"
edited by Jennifer Brozek & Amanda Pillar
Format: Paperback, 320 pages
Publisher: Morrigan Books
Review copy received through the courtesy of the publisher, Morrigan Books
Humanity was decimated by bio-terrorism; three engineered plagues were let loose on the world. Barely anyone has survived.
Just a year before the collapse, Grants Pass, Oregon, USA, was publicly labelled as a place of sanctuary in a whimsical online, “what if” post. Now, it has become one of the last known refuges, and the hope, of mankind.
Would you go to Grants Pass based on the words of someone you’ve never met?
With alarming everyday news and with information that seems to describe the downfall of our world it is no wonder why the post-apocalyptic fiction picked up the interest of readers and became a genre on its own. This is one of my favorite subjects as well and it all started with Stephen King’s “The Stand”, therefore when I’ve found out about Jennifer Brozek and Amanda Pillar’s collection of post-apocalyptic stories I desired to read “Grants Pass” as soon as possible.
It is the second time this year when I come with a different approach for my review of an anthology. I believe that such projects deserve a story to story review and it is a fair way to throw a light on the entire collection, each one with its strong and weak elements. But this time I’ll go for a general review of Jennifer Brozek and Amanda Pillar’s “Grants Pass” because in the first place I read the anthology a little while ago and without the proper notes I can’t take properly every detail of each story into attention and secondly the stories share the same starting point and premise, the way they are delivered is different and depends on their authors.
“Grants Pass” starts with a prologue in the form of an online journal entry, written by Kayley Allard, a girl who considers a possible end of the world and its consequences. Hoping to meet her friend in the case of their survival she sets a meeting point in a small town, Grants Pass, but that it can also be a starting point for the rebuilding of the world. The prologue is followed by a series of newspapers entries from different countries that describe a collapsing world because of diseases outbreak following the escape of three laboratory modified viruses, natural disasters and terrorists’ acts. These set into motion the premises for the stories of “Grants Pass”, the characters of each such story learning and trying to reach the meeting point proposed by Kayley Allard, the town of Grants Pass.
Although the characters share this common goal, their situation and location is different, each one of them facing personal ordeals and the change in their existence in their own particular way. We are taken through different corners of the world, from Nepal to Belgium and United States, but the most challenging will prove to be the islands, territories that enclose and challenge the attempt of the characters to reach Grants Pass, with stories set in the island of Lanzarote, Spain, and Cyprus. Not even the space will miss this appointment, with a few heroes found by the apocalyptic events in a shuttle at four hundred kilometers from Earth. We are taken through different states of mind too, the psychological aspects playing naturally a key role in the stories and taken the characters through a wide range of emotions. The tone of stories is a battle of perspective, many of them exhaling an optimistic and hopeful undertone and others covering a grim and pessimist landscape. The anthology is brought to its final point in the same way as it is started, with a journal entry made by Kayley Allard that also sets the finish in light tones. I honestly think that “Grants Pass” would have worked better for me without that particular epilogue, but it is not bad that the collection ends in an optimistic atmosphere.
As natural for every anthology from the entire line-up of stories I had a couple that worked better for me and went closer to my heart. Going straight to my favorite story of “Grants Pass” is Cherie Priest’s “Hells Bells”, because it is rarely seen an post-apocalyptic scenario to be brought up through the eyes of a child. Cherie Priest masterfully captures the essence of childhood in subtle notes and makes it face such a dire perspective in an innocent approach. Seanan McGuire’s “Animal Husbandry” deals with the apocalyptic scenery from another particular angle. A veterinary who is in search of her daughter will find a new meaning for compassion and a new perspective for humanity in the dreary events that are unfolding. Jay Lake’s “Black Heart, White Mourning” has at its center a former patient in a mental institution and who now finds her freedom in the new landscape. Told through journal entries the story presents some unsettling thoughts, some disturbing moments and an uncomfortable end.
Post-apocalyptic fiction offers many reasons for meditation and “Grants Pass” is no different. Jennifer Brozek and Amanda Pillar collect in their anthology stories that will fuel the thoughts driven by the apocalyptic scenarios and will keep them burning long after the reader finishes “Grants Pass”.
Posted by Mihai A. at 12:01 PM