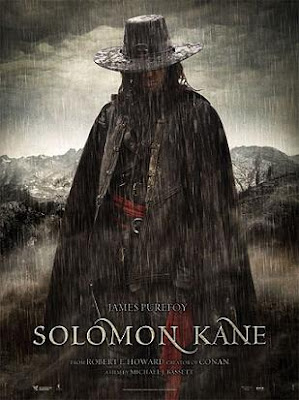 I am more familiar with Robert E. Howard’s character, Conan, than with another of his fictional heroes, Solomon Kane, having read more stories centered on the famous barbarian than on the Puritan adventurer. However, the past week-end I got a chance to look a bit more on the Robert E. Howard’s character, although from a different perspective, when I grabbed a DVD of the movie “Solomon Kane”.
The movie opens with Solomon Kane and his crew attacking a fortress in North Africa with plundering intentions. Here Solomon Kane meets a demon, The Devil’s Reaper, who demands his soul. Escaping from the encounter Solomon Kane returns to England and tries to redeem his soul. He finds such an opportunity when an innocent young woman is kidnapped by an evil sorcerer, Malachi.
I am not certain if the movie is based on a Robert E. Howard story, because I am not familiar with all the stories featuring Solomon Kane, but from information I found it doesn’t seem to be. Those sources even state that the movie is an origin story for Solomon Kane and it is intended to be the first part of a trilogy. These sources are backed up by the actual movie, which certainly feels like an opening for a wider story and that begins and ends like a premier part in a series.
This aspect leads to a small problem with “Solomon Kane”, a problem of pace and rhythm that looks to be uneven. After a beginning that jumps into full action, with an alert battle scene and a very interesting encounter, the movie slows down and it takes some time for Solomon Kane’s character to be built. The process is slow and pretty much uneventful, with almost half of the movie necessary for the plot to develop and for the conflict of the movie to kick into motion. Considering that the second half offers more action scenes and its rhythm picks up more speed the movie feels a bit uneven in its pace.
The action scenes offer interesting moments to the viewer. With plenty to enjoy in these scenes, they also offer plenty of swashbuckling but also violent and gory moments that are quite graphic. All of these on an excellent background and atmosphere, elements of the “Solomon Kane” that are at their best. There is plenty to admire at the scenery, landscapes and locations that are truly impressive in their beauty, but that also help the atmosphere of the movie. It is a dark and gritty atmosphere, an almost palpable one and that matches in every little detail the feeling evoked by the story. The weather and the lights bring their contribution too and make this dark atmosphere almost as unbearable for the viewer as it is for the movie characters.
Sadly, the atmosphere and the action scene are not matched by the story. It is not a bad story, but it is a flawed one, with easily to spot weaknesses and question arouse that in the end remain unanswered. Solomon Kane is on a path to redemption, but nothing explains what lead them to this path and his need of salvation. Also, there is a deeper connection between Malachi and Solomon Kane, with the evil sorcerer occupying the castle of Solomon Kane’s father and trying to lure Solomon to his childhood lands. But this deeper connection remains a mystery. “Solomon Kane” keeps its ups and downs in balance though, because although the story can be put at the downs the actor giving life to the main character can be put at the ups. As little as I know about the fictional character of Robert E. Howard I still made a personal image of Solomon Kane, a somber and quite dark character. James Purefoy reflects exactly that imagine, looking very somber and dark and giving a solid interpretation. James Purefoy is entirely in the skin of the haunted character that Solomon Kane is, haunted by his past and need for salvation, and backed with very good props I believe that another choice for this character couldn’t have been better.
“Solomon Kane” is a small budget movie, but that is not reflected on its creation rather on the story and pace. But it is a dark fantasy, with beautiful images, catchy action scenes and a solid character in its center and that makes it an enjoyable movie, one that will gladly consider for a re-watch.
Posted by Mihai A. at 12:31 PM

The story for Solomon Kane is entirely the creation of Michael J. Bassett. Though it has one or two vague references to the other stories, it's pretty much an original tale, and one that many Howard fans have a problem with (specifically the idea of Kane starting off life as a violent, greedy, ruthless mercenary - something that renders the film incompatible with more than a few stories).

All that said, when one views it as a separate entity from the source material, it's pretty good: not entirely original, and there are pacing issues, but it's still better than half the dreck I've seen issuing from the gaping maw of Hollywood. It's a crime it hasn't seen a cinematic release in the US.

It is a really enjoyable movie and I agre with you, it is better than many I've seen done at Hollywood. I hope that it will be available in the US too and I also hope that it will have some success because I would really like to see a sequel of this one :)

Definitely worth checking out the Solomon Kane short stories. As Taranaich said, they're different from the film, but very good in their own way. Kane's a wonderfully repressed, embittered, driven, ruthless character with little regard for his own life - very different from your typical sword & sorcery type. Howard only wrote a few Kane stories, so it won't take long to tear through them all.

(Plus, he fights Pterodactyl people!)

Jared, I read a few, but I really need to read them all. And the movie stressed that desire even more :)