"The Company" by K.J. Parker 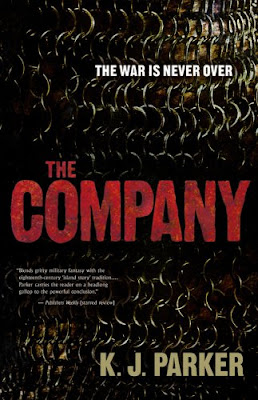 "The Company"
by K.J. Parker
Format: Paperback, 448 pages
Publisher: Orbit Books UK
After three published trilogies, “The Fencer”, “The Scavenger” and “The Engineer”, “The Company” is the first stand alone novel of K.J. Parker.
After many years of war Teuche Kunessin comes home with a new proposal for his former A Company brothers in arms, to start a new life on a deserted island. He wants to colonize the island of Sphoe and to settle in a peaceful life together with his friends. But their tasks will encounter difficulties as much from outside their group as from inside it.
“The Company” is not the classical fantasy novel, because although K.J. Parker sets the novel in a fantasy setting the story has many layers and explores in its vast majority the human nature. The world of “The Company” is a vast one, but shattered by a long and consumptive war. The author doesn’t name the belligerent sides, doesn’t point the reasons behind the war and doesn’t center the story on it. But all this are not important because I believe that K.J. Parker makes a statement on the general notion of war and points the reader throughout the novel to the consequences of war, consequences suffered by the society, by all those caught in the act of war and by the ordinary and innocent people.
The war brings together the five central characters of the novel and is the foundation of their friendship (formerly six friends, but one of them died in the war). Through the depicted scenes of war involving their group K.J. Parker starts building the main characters. And this is the area where “The Company” is focused, on characterization and on the human psychology in different situations. The five central characters captivate immediately the attention of the reader and they have a complex personality, built with every page of the story. I could easily see their struggle to readapt to the peaceful way of life after they have lived on the thin edge between life and death in war (they were line-breakers, meaning they were in the first line of battles). Their struggle will encounter many other difficulties, betrayal, selfishness, revenge and hidden secrets. Through all this K.J. Parker builds the conflict of the novel and the mystery of story, both resolved only on the last pages of the book.
The conflict and the mystery kept me wondering what will be happening next throughout the whole book, but the novel’s action moves slowly. Sometimes the novel seems to go nowhere and the only action is that from the wartime recollections. And I could see a great attention to detail given by K.J. Parker to the different processes of building a new colony. Every event and action involving the new community is treated in its minor details. I have to admit that I personally liked this attention to the details and through “The Company” I’ve learned quite a few new things I didn’t know until now. The story is also quite dark and gritty and it doesn’t have an optimistic tone and what I really liked is that it doesn’t point toward the morality of one action or another, it is a story of life.
I believe that K.J. Parker’s “The Company” is not the usual fantasy novel and will not appeal to every reader. I enjoyed quite a lot “The Company” for the great in-depth characterization and for its psychological aspects which brought me through the slow moving pace to the end of the story, an end which same as the novel will not appeal to every reader.
Posted by Mihai A. at 11:09 AM

I enjoyed The Company a great deal myself.

The only way I can see someone being disappointed with this novel is if they pick it up expecting an action-packed adventure because of the tagline, "The war is never over." After reading the book it became apparent that the tagline is meant to imply something much more subtle, something on the order of PTSD.

Thank you very much, Greyweather :)

You are right, at first I also believed that the novel is action-packed because of the tagline. But although "The Company" wasn't why I expected I enjoyed it a lot.

I did NOT like this book at all (and no, I wasn't expecting an action-packed adventure). Nice review though all the same :)

Ben, thank you very much :)
I always say that if we all liked the same things it will be a boring world ;)

My reaction to the book was also pretty strong: gripping tale that kept me reading, profound regret that I wasted my time doing so; first and last KJ Parker book

I've just ordered this one :) Loved her other books, and she's on the list of nominees for the Gemmell award.

Thank you for your excellent review.

I'm still indecisive whether this is a book for me or not. I have to think about it. In the meantime I try to finish some other books.

Mihai, because you mentioned the attention to detail in this book I'll be looking for it the next time I go book shopping. Thanks for a great review, and I happen to like different and realistic.

Liviu, I understand you, I felt that way for other authors. But for K.J. Parker I added the other titles on my buying list :)

Zoe, it is one of the great contenders for the Gemmell award in my opinion :)

Michael, thank you very much :)
Maybe you can try to read a few excerpts from "The Company" to make a better opinion. I know that I try this method when I don't know what to make of a title.

Barbara, thank you very much :)
And I like too from time to time things that are different and realistic.