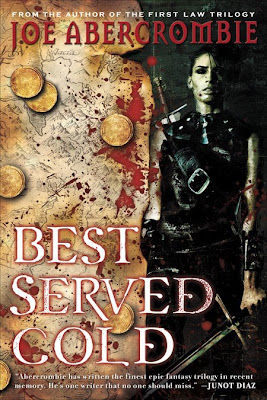 Pat from Pat’s Fantasy Hotlist revealed in one of his posts the future cover of the US edition of the upcoming Joe Abercrombie’s novel, “Best Served Cold”. Now, I have to say that the cover art isn’t bad and taken independently it catches the eye. However, I can’t help myself and not notice that it pales in comparison with the UK cover of the novel. With all the honesty I have to say that the image of the girl added on the right side of the cover ruins the effect and the savor of the map seen in its entire beauty. It is not for the first time when a book has different covers for the UK and US editions and I don’t know the demands on this two book markets, but I personally I would have liked the same cover on the both editions (the UK one, seen below).

ver read any of these but have stopped several times to admire the covers. Good thing i'm in the UK :)

I payed once with 2$ for a novel more just to have the cover I liked :)

Not surprised they used a woman. Google Adsense apparently had trouble for a while with ads placed next to images of women. People would apparently click the ad just because of its proximity to the image.
Once an author gains a sort of cult following, it probably won't be necessary at all. Janet Evanovich's _Stephanie Plum_ novels never had a woman or any fancy graphic on here covers. Still insanely popular and the series is at over 13 books if I remember correctly.

Simon, I believe that Gollancz follows the same line with Abercrombie's novels. Which is looking simple, but very good in my opinion :)

I prefer the UK cover, and I think I may drop the publisher a note to tell them so.

Barbara, I think that many people prefer the UK cover (including me) :)