"The Reach of Children" by Tim Lebbon 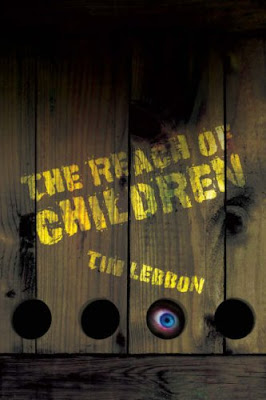 "The Reach of Children"
by Tim Lebbon
Format: Hardcover, 112 pages
Publisher: Humdrumming
Until one year and a half ago I was unfamiliar with the works of Tim Lebbon, but since then my each encounter with Lebbon’s works have been better and better and “The Reach of Children” is no exception.
Daniel, a 10 years old boy, lost his mother after a long illness. His father has difficulties in dealing with the loss and because of this he ends up neglecting his son. And when Daniel hears about a story of a girl found in a box buried in the ground he asks himself what is the link between that story and the box under his father’s bed.
Basically “The Reach of Children” is a horror story, but Tim Lebbon’s novella is more than that. I believe that enclosing the novella in the horror genre limits is not a proper thing to do and therefore those who are not attracted by this genre will miss a great story. “The Reach of Children” is a story about life, about loss and grief and about the efforts of people to continue their lives without the lost loved ones. Tim Lebbon’s story is masterfully written, with powerful emotions captured inside it and one that breaths sadness through its letters and words.
I am fortunate enough not to have lost anyone dear to me, but I have a close friend who lost his father in our high-school days through a long and terrible illness. I remember that visiting my friend on those days felt awkward and after his father’s death none of us seemed to know what is the proper thing to say, although we wanted to help him. This is one of the feelings caught by Tim Lebbon in his story. Told from the perspective of little Daniel the story doesn’t miss any of the difficult moments after Daniel’s loss. I could feel Daniel struggle to find his place again, with all the familiar places reminding him of his mother, with friends who don’t know what to say and with his family traditions irremediable broken. And Daniel being a 10 year old made me feel a greater struggle, after all at that age children have the whole world at their feet, their greatest worry is playing and they believe that their parents are immortal. With a flowing writing style it is easy to get attached to Daniel and to feel the difficulties he and his father go through.
My only complaint is that “The Reach of Children” is a limited edition and after its publisher, Humdrumming, closed its doors I think that the novella is very hard to find. I really hope that this story will be re-published because Tim Lebbon’s novella deserves a wider audience and because a very good story deserves to be read and this is a very good story.
Posted by Mihai A. at 10:42 AM

Great review Mihai, I am also a fan of Tim Lebbon and was trying to track this down. Found this on the authors website which allows you to buy it direct from here Hope it helps others get hold of this excellent book.

Colin, thank you very much :)
Also thank you for the link, I forgot that Tim Lebbon has copy of his novella.

Really enjoyed this review. Sounds like a very interesting novel, I'm really beginning to like stories in which the fantasy elements are very minute as people struggle with real life issues.

Lebbon is definitely an author I plan on reading in the future.

Harrison, Tim Lebbon is a great writer and I definitely recommend his works :)