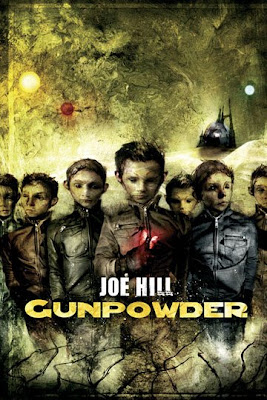 "Gunpowder"
by Joe Hill
Format: Hardcover, 81 pages
Publisher: PS Publishing
When you have a world renowned author as father, Stephen King, it is almost impossible for your works not to be compared with those of your father. But until now Joe Hill made his voice heard and with this new novella, “Gunpowder”, he makes another stand for his unique talent.
Gunpowder is a remote planet or properly said is the nickname given to R2 by its inhabitants. Its inhabitants are a group of artificially created children with the power to psyform, meaning that they can weave DNA, can create living things and can make a new reality. Their mission is to terraform R2 or Gunpowder as they call it from a desolate planet into one proper for living. And they are supervised by the only adult on the planet, Elaine.
One of the things I absolutely love at Stephen King’s works is his children characters or the recollections of his characters from their childhood. In “Gunpowder” Joe Hill proves an equal talent in creating such lovely children characters and I have to admit that I loved this novella’s characters not only taken individually, but as a children group as well. Each character has his own personality and is acting accordingly to it, but what I loved the most is the group taken as a hole. Although the characters are strong and stand out, the group sounds as a true group of children, with a central figure whom everybody is looking up, with their search for play, their ability to befriend, to be cruel and to compete with each other. I also loved the guessed metaphor behind this group of children, the power to build a world from dreams, an experience that is not strange to my childhood when I had a different world built in my imagination, and the fading of this dreams after growing up, as it is described in one characteristic of this children’s talent, the psyforming: “Their powers were engineered to burn out in their twenties, a harrowing passage that would probably kill several of them, from terrific fevers.”
Elaine, the only adult character of the novella, is a very nicely built character as well. I could almost feel her emotions, her memories of her childhood and her efforts in protecting Charley, an outcast because of his lack of “talent”. Elaine and the children as well captured my attention and emotions until the end of the novella and I could bond with almost every single character. What Joe Hill did with his “Gunpowder” characters is even more impressive considering that he managed to build such strong characters in only 80 pages.
Impressive too is Joe Hill’s work on the story and the action of the novella. The story thread entangled me from the beginning and kept me racing through the pages of “Gunpowder” until the final dot. The action is steadily built, with each chapter adding a new element in the general layout of the story and reaching its climax in a breathtaking end. The end of the story left me with that unique wish for the story not to end and with a very pleasant feeling toward the novella.
Like I said it is impossible not to compare Joe Hill’s works with those of his father, but with pieces such as “Gunpowder” Hill proves that has his own path to follow and new and wonderful things to bring in the world of literature.
Posted by Mihai A. at 11:22 AM

I loved heart shaped box! I prefer Hill to King by a long way.

I hated "Heart-Shaped Box" but have been meaning to give Joe Hill another chance with either "Gunpowder or "20th Century Ghosts." The problem is that there are so many good books coming out shortly...

Excellent review and I agree with you Mihai, Joe Hill could easily surpass his fathers talents (even if not his sales).

Ben, you definitely have to give Joe Hill another chance. He is fully worth it :)

Colin, thank you very much :)
Although I admit that sales are important, I tend to look on other criterias more ;)

Holy Hell, I never realized that Joe was King's son! I've had H-Shaped Box on my shelf for two months now - will definitely read it now!

Dave, he is as talented as his father :)