Cover art - "The Dog of the North" by Tim Stretton 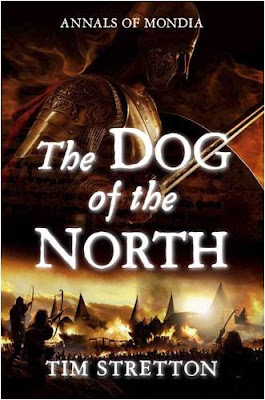 One of my future reads will be Tim Stretton’s “The Dog of the North”. The novel was released on July last year by MacMillan New Writing in Hardback format and its Paperback edition will be released this year on 5th of June by another imprint of Pan MacMillan, TOR.
Winter on the lawless plains of the Emmenrule. En route to her wedding in the fortified city of Croad, the beautiful Lady Isola is kidnapped. What is worse, her captor is the infamous Beauceron. But, ruthless as he may be, Beauceron is no ordinary brigand: it is his life's ambition to capture Croad itself – and he will stop at nothing to achieve it.
Mondia, though, is a continent of many stories, and in Croad, a young man named Arren has been taken under the wing of the city's ruler, Lord Thaume. Although of low birth, Arren is destined to become a knight of valour and renown. But as his fortunes rise, so those of his childhood friend Eilla fall.
Beauceron has returned with his human plunder to his home – the exquisite frozen city of Mettingloom. There, the imperious Isola finds herself reassessing her former loyalties as she struggles to adapt to her new life. Beauceron, meanwhile, is manoeuvring to raise an army. He is determined to defeat his enemies, both inside and outside Mettingloom – and to capture the city he loathes.
But what is the source of Beauceron’s obsession with Croad? Can Arren reconcile his

youthful ambitions with his growing feelings for Eilla? And just who is the Dog of the North?
Tim Stretton’s debut novel is a spellbinding tale of loyalty and betrayal, homeland and exile, set in a brilliantly imagined world of political intrigue, sorcery, and warfare on an epic scale.
I personally have the hardback edition, but I cannot admire the new cover of “The Dog of the North”, one realized by Steve Stone if I am not mistaken (seen at the beginning of the post). I also cannot notice the real improvement realized compared with the hardback edition. The new cover keeps the elements of the first cover art but adding something extra to its general aspect and dynamics. I really like the new cover and in my opinion it speaks a little more about the novel. However, I eagerly wait to explore a little more between its covers, but like I said not much to wait until then.
Posted by Mihai A. at 12:23 PM

Thanks for posting this!

As you'd expect me to say, I like both covers, but I do prefer the paperback which has captured a lot of what I've tried to put in the novel.

I hope you actually like the text too when you come to read it!

Thank you for mention this book. Didn't read about it so far. Beside the covers the content sound promising. And again one more book for my list.
I hope you will write a review about it.

Salut.
oooh pretty! See if I lived in america it would be easy, I could sell my blood to buy more books. *sigh*

Tim, thank you for visiting my blog :) The paperback cover looks really good and I am looking forward to read your novel.

Michael, I'll read "The Dog of the North" after Mike Carey's novel :)

Adele, your Romanian becomes better and better ;)
And I totally understand you, I just keep putting money in my piggybank for a new massive order on Amazon :D

I am truly curious about this one; I was about to get it when originally published in the UK last year, but both the subject and excerpts are "in-between" for me, could go either way, and it was too expensive for such.

I bought then a very reasonably priced e of Zael's Inheritance and again it's an in-between book, good enough so I will read it sometime in the future when in the mood for it, but not compelling enough to read it "now"

If compelling reviews come along, I may go with the mmpb to be released later this year since that one is priced ok for taking a chance, considering that being a non-US book I cannot browse it in stores for now...

I will have a review of the novel pretty soon :)
And I too wait for the right mood when it comes to certain titles. After all we can't read everything (although I would certainly like that) :D