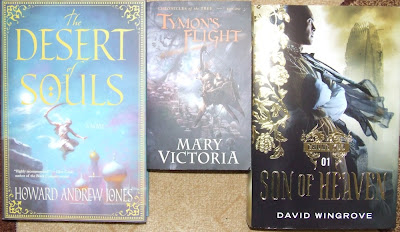 Three very interesting titles popped up this week in my mailbox, all three of them appealing to me and therefore taking positions close to the top of my TBR list:
- "Tymon's Flight" by Mary Victoria (through the courtesy of the David Gemmell Awards commitee);
The World Tree rises up out of the seething clouds like a green mountain, lifting its children up to the light. All creation nestles in its gigantic branches: all take shelter beneath its canopy. There is no world besides this one -- or so the priests in Argos city would have everyone believe. What then if the green God should wither away, or withdraw Her blessings from her children?
Tymon is an orphaned boy growing up at Argos seminary, in the lush heart of the Central Canopy. The Argosian priests have declared science to be a heretical pursuit, and banned travel beyond the confines of the Tree. But Tymon yearns to discover new horizons. He longs to break free of the seminary. When he discovers an interloper in the city baths -- a foreigner, a female, one of the stigmatised Nurian pilgrims brought to the town every year as slaves -- his life changes forever.
Punished for his temerity and exiled to the dry and forsaken Eastern Canopy to serve out his indenture, he finds that there are different ways of interpreting the cosmos beyond those taught to him by the priests in Argos. He discovers that the heresy of Grafting, belief in the mystic "Tree of Being", still persists in the eastern colonies. And he meets Samiha, the girl who holds the key to his own latent powers, as well as the ultimate fate of his world.
- "The Desert of Souls" by Howard Andrew Jones (through the courtesy of St. Martin's Press);
In 8th century Baghdad, a stranger pleads with the vizier to safeguard the bejeweled tablet he carries, but he is murdered before he can explain. Charged with solving the puzzle, the scholar Dabir soon realizes that the tablet may unlock secrets hidden within the lost city of Ubar, the Atlantis of the sands. When the tablet is stolen from his care, Dabir and Captain Asim are sent after it, and into a life and death chase through the ancient Middle East.
Stopping the thieves—a cunning Greek spy and a fire wizard of the Magi—requires a desperate journey into the desert, but first Dabir and Asim must find the lost ruins of Ubar and contend with a mythic, sorcerous being that has traded wisdom for the souls of men since the dawn of time. But against all these hazards there is one more that may be too great even for Dabir to overcome...
- "Son of Heaven" by David Wingrove (through the courtesy of Corvus Books).
The year is 2085, two decades after the great economic collapse that destroyed Western civilization. With its power broken and its cities ruined, life in the West continues in scattered communities. In rural Dorset Jake Reed lives with his 14-year-old son and memories of the great collapse. Back in '43, Jake was a rich, young futures broker, immersed in the datascape of the world's financial markets. He saw what was coming - and who was behind it. Forewarned, he was one of the few to escape the fall. For 22 years he has lived in fear of the future, and finally it is coming - quite literally - across the plain towards him. Chinese airships are in the skies and a strange, glacial structure has begun to dominate the horizon. Jake finds himself forcibly incorporated into the ever-expanding 'World of Levels' a global city of some 34 billion souls, where social status is reflected by how far above the ground you live. Here, under the rule of the mighty Tsao Ch'un, a resurgent China is seeking to abolish the past and bring about world peace through rigidly enforced order. But a civil war looms, and Jake will find himself at the heart of the struggle for the future.
Thank you all very much!
Posted by Mihai A. at 1:15 PM