With vivid imagination and fresh and original stories Ekaterina Sedia is one of the names that imposed itself among my favorite writers. There is no surprise then that when Ekaterina Sedia’s name appears on the list of upcoming releases I am eagerly and joyfully looking forward to her next work. This time there is more than one good news, because not only that Ekaterina Sedia has a new novel coming up this year, but also a new anthology. 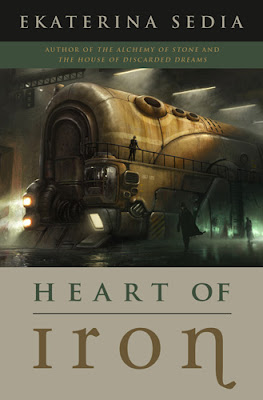 “Heart of Iron”, the fifth novel of Ekaterina Sedia, comes up in July from Prime Books and has a very intriguing and interesting concept. My previous experiences with the authors’ works were nothing but pleasant so I am convinced that “Heart of Iron” will be a pleasant surprise as well.

In a Russia where the Decembrists’ rebellion was successful and the Trans-Siberian railroad was completed before 1854, Sasha Trubetskaya wants nothing more than to have a decent debut ball in St. Petersburg. But her aunt’s feud with the emperor lands Sasha at university, where she becomes one of its first female students—an experiment, she suspects, designed more to prove female unsuitability for such pursuits than offer them education. The pressure intensifies when Sasha’s only friends—Chinese students—start disappearing, and she begins to realize that her new British companion, Jack, has bigger secrets than she can imagine.

Sasha and Jack find themselves trying to stop a war brewing between the three empires. The only place they can turn to for help is the Heavenly Kingdom of Great Peace, newly founded by the Taiping rebels. Pursued by the terrifying Dame Florence Nightingale of the British Secret Service, Sasha and Jack escape across Siberia via train to China. Sasha discovers that Jack is not quite the person she thought he was … but then again, neither is she. 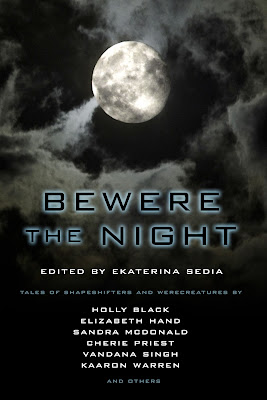 Also from Prime Books, in April, Ekaterina Sedia will publish an anthology featuring stories of shapeshifters and werecreatures, with some very interesting names lined-up on the table of contents, such as Kaaron Warren, Cherie Priest, Holly Black, Nick Mamatas or Lavie Tidhar, just to name a few.

Kitsune. Werewolves. Crane wives. Selkies. Every culture has stories of such strange creatures – animals turning into humans, humans shapeshifting into animals. Sometimes seductive, sometimes bloodthirsty, but always unpredictable like nature itself, these beings are manifestations of our secret hearts, our desire to belong to both worlds: one tame and civilized, the other unfettered and full of wild impulse. Here are stories that will make you wish you could howl at the moon until your heart bursts with longing or feel yourself shedding your human body as easily as a snake sheds its skin. Beware the night … it might not kill you, but it will certainly steal you away!

Introduction
“The Thief of Precious Things” by A.C. Wise
“Poison Eaters” by Holly Black
“Go Home Stranger” by Justin Howe
“The Heavy” by Cherie Priest
“Tusk and Skin” by Marissa Lingen
“A Song to the Moon” by Richard Bowes
“In the Seeonee Hills” by Erica Hildebrand
“The Sinews of His Heart” by Melissa Yuan-Innes
“(Nothing But) Flowers” by Nick Mamatas
“The Coldest Game” by Maria V. Snyder
“Red on Red” by Jen White
“Extra Credit” by Seth Cadin
“Thirst” by Vandana Singh
“Grotesque Angels” by Gwendolyn Clare
“Blue Joe” by Stephanie Burgis
“The Werewizard of Oz” by Lavie Tidhar
“Seven Year Itch” by Leah Cutter
“An Unnatural History of Scarecrows” by Mario Milosevic
“The Gaze Dogs of Nine Waterfall” by Kaaron Warren
“Snow on Sugar Mountain” by Elizabeth Hand
“The Aphotic Ghost” by Carlos Hernandez
“The Fowler’s Daughter” by Michelle Muenzler
“Moonlight and Bleach” by Sandra MacDonald
“She Drives the Men to Crimes of Passion!” by Genevieve Valentine
“Coyotaje” by Marie Brennan
“Swear Not by the Moon” by Renee Carter Hall
“Infested” by Nadia Bulkin
“Watchmen” by Aaron Sterns
“And Neither Have I Wings to Fly” by Carrie Laben

It is certain that Ekaterina Sedia will keep me very busy this year, especially since I still have to catch up with “The House of Discarded Dreams”, the novel she published last year.