"Temple of the Serpent" by C.L. Werner 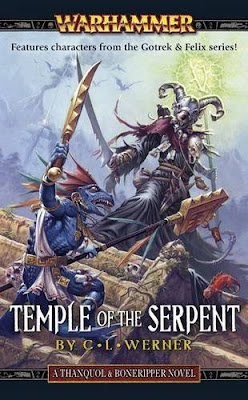 "Temple of the Serpent"
by C.L. Werner
Format: Paperback, 416 pages
Publisher: The Black Library
Review copy received through the courtesy of the publisher, The Black Library
After a series of failures, Grey Seer Thanquol is offered a chance to redeem himself by going to the island of Lustria to kill the Prophet of Sotek. Dogged by assassins and stranded in a foreign land of giant lizards, temple cities and endless jungle, Thanquol must use all of his cunning and magic if he is to come out alive.
Last year, among my readings I discovered a character of repulsive nature, but that proved in the end to be surprising and a fun encounter. That character was Grey Seer Thanquol and after my initial meeting with him I was quite pleased to find him again in another novel, C.L. Werner’s “Temple of the Serpent”.
As was the case with the first novel featuring Thanquol, “Grey Seer”, where C.L. Werner deals with one of the least present races of the immense Warhammer universe, this time we can explore one of the least visited locations, Lustria. At least for me since I am not familiar with another Warhammer novel set on the island of Lustria. The reader discovers a luxuriant setting inhabited by the lizardmen, exploring dense jungles, hidden cities and vast pyramids. Lustria looks very much like a reflection of a Mesoamerican culture on the Warhammer universe, boosting one of its races with elements of the said culture such as topography, architecture, science or mythology. There are benefits aplenty from this mix, the reader running into plenty of occasions in which the locations inflict a claustrophobic and discomforting sentiment upon the characters, bringing more danger to the adventure and transforming it into an even more savory one.
I opened “Temple of the Serpent” with the hope of meeting again Grey Seer Thanquol and my expectations were not only fulfilled, but also surpassed. Because, once again, C.L. Werner gives voice to a disagreeable presence with great mastery, changing the skaven character if not into a pleasant one (that is still hard to do considering Thanquol’s nature), at least into a more tolerable one. “Temple of the Serpent” offers plenty of plots, twists and politics in the unmistakable style of the skaven race. The constant bickering between the members of the same expedition, the ever-present paranoia of Thanquol, his scheming and dreams of grandeur are the core of the adventure. All these and a few more elements set the story into motion, bringing a few twists and turns along the way and also plenty of hilarious situations and humorous thoughts from the part of Thanquol that make “Temple of the Serpent” an even more entertaining novel.
C.L. Werner’s “Temple of the Serpent” is fast paced and moves quickly, without downfalls in the rhythm. Plenty of action awaits the reader within the pages, fighting scenes, zombie pirates, dark corridors and giant snakes, all for the pleasure of that reader. However, like in the first “Thanquol & Boneripper” novel, the human characters do not rise to the same level as the rest of the cast and the story. The entire human cast seems rather flat, driven by a single purpose, pinpointed from the beginning of the story for each of them and without any element that will give them a strong presence. Most of the time I felt that they were a crutch for Thanquol and the skaven group to use at the times of need and nothing more.
There are characters that become legend and given the time and space needed Thanquol can turn into one in his own way. Luckily, we will get a chance to follow Thanquol in another adventure with a new novel, but I am not sure if that is not the last one considering its title, “Thanquol’s Doom”. Anyway, whatever Thanquol’s fate might be I am looking forward to the next novel, because as was also the case with “Grey Seer”, C.L. Werner delivers an extremely fast and fun story with “Temple of the Serpent”.
Posted by Mihai A. at 12:00 PM