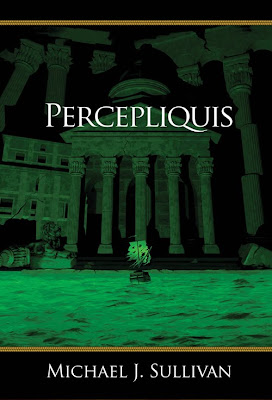 I am behind with a few things and one of them is Michael J. Sullivan’s “The Riyria Revelations” novels, “The Emerald Storm” and “Wintertide”. Although I do have both of them due to the courtesy of the author and his lovely wife my new and ever-changing schedule prevented me to read them so far. However I am determined to finish these novels in the course of this summer. Especially since the sixth and last volume of the series looms on the horizon.
“Percepliquis” release date was delayed more than once if I am not mistaken. One of the reasons for such a delay was a very interesting and very pleasant piece of information, Michael J. Sullivan received an offer for a new home for his “Riyria Revelations”, at Orbit Books. It is well deserved and I am happy to see Michael J. Sullivan reach a wider market, because “The Crown Conspiracy” was an unexpected and pleasant surprise for me, strongly confirmed afterwards by “Avempartha” and “Nyphron Rising”. 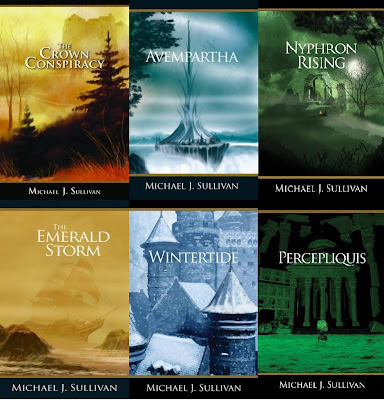 Another thing that made “The Riyria Revelations” an even more interesting series is that the cover artworks are created by the author himself. A series of simple, but evoking covers, enough to tease the appetite of the viewer and with an appealing color scheme. “Percepliquis” benefits from the same treatment, although I cannot say that it is my favorite, that honor goes to “Nyphron Rising”. In this case, something about the ship doesn’t seem right to me, but I have to admit that it still is a strong cover, that falls in the line of the previous ones and gives the series further solidity. It is great that Orbit Books allowed the release of “Percepliquis” on its own for the benefit of the fans and readers of the series who followed the adventures Hadrian Blackwater and Royce Melborn so far, because they opted for the publication of “The Riyria Revelations” in three volumes containing the six novels. It is a very nice gesture indeed. And although Orbit covers made by Larry Rostant are not bad, my reluctance towards characters on book covers make Michael J. Sullivan’s own designed covers my favorites.

“Percepliquis” will be released on January 2012 by Ridan Publishing and Orbit Books will release the first volume, “Theft of Swords”, on November 2011, the second, “Rise of Empire”, on December 2011 and the third and final volume, “Heir of Novron”, on January 2012.
Here is also the synopsis of Michael J. Sullivan’s “Percepliquis”:
I saw a great journey. Ten upon the road, she who wears the light will lead the way. The road goes deep into the earth, and into despair. The voices of the dead guide your steps. You walk back in time. The three-thousand-year battle begins again. Cold grips the world, death comes to all, and a choice is before you.
Percepliquis is the final installment of the epic fantasy, The Riyria Revelations. In this saga that began with The Crown Conspiracy, two thieves caught in the right place at the wrong time were launched on a series of ever escalating adventures that have all lead to this moment. Three thousand years have passed and the time for Novron’s heir to act has arrived.
Posted by Mihai A. at 1:00 PM

What a ridiculous name for a book! Although I guess it doesn't really matter what you call the sixth book in a series.

I started out with the newly published three volume set and after finding out what the original published covers looked like I would have to agree with you that life-like images of the characters on covers generally don't do well. If anything they inhibit the reader from cultivating a unique image of the character in their mind. In fact, seeing the Orbit covers is what made me hesitant of reading the series in the first place. Glad I went ahead and did anyway.