"Banquet for the Damned" by Adam L.G. Nevill 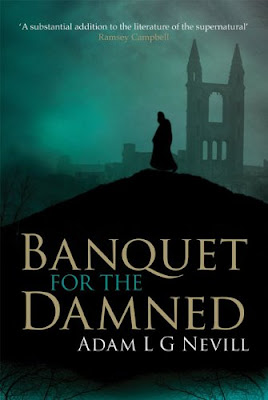 "Banquet for the Damned"
by Adam L.G. Nevill
Format: Paperback, 368 pages
Publisher: Virgin Books
Review copy received through the courtesy of the publisher, Virgin Books
Few believed Professor Coldwell was in touch with an unseen world - that he could commune with spirits. But in Scotland’s oldest university town something has passed from darkness into light. And now the young are being haunted by night terrors. And those who are visited disappear.
This is certainly not a place for outsiders, especially at night. So what chance do a rootless musician and burnt-out explorer have of surviving their entanglement with an ageless supernatural evil and the ruthless cult that worships it?
Adam Nevill published three novels already, the latest, “The Ritual”, released was this year. With the occasion of “The Ritual” publishing I contemplated reading Adam Nevill’s novel, but on a second thought I wondered if it were not better to see where his journey in the world of publishing had started. With this idea in mind I’ve started reading his debut novel, “Banquet for the Damned”, instead of Adam Nevill’s latest release.
“Banquet for the Damned” is a book that brought a small measure of success to Professor Coldwell and a few of devoted fans. One such admirer is Dante Shaw, a musician who receives his lifetime’s dream opportunity when Professor Eliot Coldwell invites him to assist his researches. With a concept album based on his most favorite book in sight Dante, together with his friend and fellow band member, journeys to the city of St. Andrews to meet his idol. The entire story of “Banquet for the Damned”, this time Adam L.G. Nevill’s novel, is set in the Scottish town, with the St. Andrews University an important part of the story as well. Although not entirely, the author manages to make the setting a vivid component of his story. It is true that sometimes I could not get an exact feeling of the location, but very often the setting joins and sets the mood of a particular scene. It is not worked perfectly, but it is more than a cardboard stage set, present only to set a surrounding for the characters to move on.
Eliot Coldwell is the reason for the presence in St. Andrews of one of the main characters, Dante Shaw, but also he is a key figure of the plot. However, he is the only character from those with a substantial presence within the story who is under-developed. All the supernatural elements of “Banquet for the Damned” have a connection with Professor Eliot Coldwell in one way or another, but these connections and a few features of his personality raised questions that remained unanswered in the end. The other characters suffer a bit too, Dante Shaw and Hart Miller seem to be a little stereotypical, but fortunately they do not bother the reader and I did not perceive them as a burden. I did like Hart Miller more, but that is a question of personal preference than anything else. However, I had more doubt about some of the minor characters. Dante’s friend, Tom, is refered only by his first name for the entire length of the novel and discarded easily at some point and without any other consideration. I don’t have any problem with Adam L.G. Nevill referring to the character only by his first name, well maybe just a very small one, but I believe that the story would have been benefited more from the development of this character and his relationship with Dante. Also, the presence of a few side characters towards the end comes a bit unexpected and convenient.
These can be seen as inconveniences, but none of the small issues I had with “Banquet for the Damned” are a major hindrance for the story. The story, however, is the strongest point of Adam L.G. Nevill’s novel. Adam L.G. Nevill builds a mystery, starting from a very strong prologue and continuing it page by page, blending together palpable and psychological terrors in an excellent mix. The supernatural is the center-point of the plot, but nothing related to its enigma is revealed suddenly or pulled out of the hat. The final scenes of “Banquet for the Damned” throw a light on the human element of the story as well, increasing the strength of the plot and the unsettling feeling of the story. There is almost nothing graphical at the Adam L.G. Nevill’s novel, the terrifying elements originating from the power of mind and imagination rather from the visual effects of violence. All the better, since such fears prove to be more frightening most of the times.
“Banquet for the Damned” is not the best of debuts, but it is a good story and I enjoyed it. I felt on some places that the novel could have been shorter, due to a couple of over-stretched and dragging moments, but otherwise it revealed a talented writer. I am happy that I started with Adam L.G. Nevill’s debut novel, because now I am certain that his works can only grow and become better.
Posted by Mihai A. at 1:00 PM