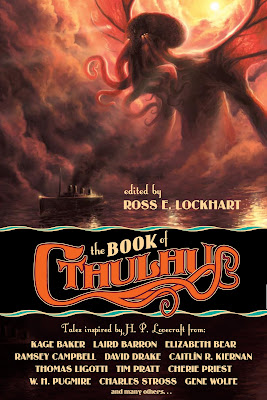 Cthulhu is in power this year! And how he cannot be when a new anthology dedicated to the mighty elder god will be released this year. After Innsmouth Free Press released “Historical Lovecraft” edited by Silvia Moreno-Garcia and Paula R. Stiles on April (I finished a quarter of this collection already) and Prime Books announced the release of “New Cthulhu: The Recent Weird”, an anthology edited by Paula Guran, on November, Night Shade Books brings its offering to the Great Old One through “The Book of Cthulhu”, an anthology edited by Ross E. Lockhart and due to be released on September. I admit that I succumbed to the powers of Cthulhu and I followed his appearances on fiction ever since my first encounter with him. It comes naturally then to eagerly await his new manifestation this autumn, especially since some heavy writers will invoke his name in Ross E. Lockhart’s anthology, such as Ramsey Campbell, Thomas Ligotti, Joe R. Lansdale, Brian Lumley or Gene Wolfe.
An interesting fact is that with certainty some of the names appearing on “The Book of Cthulhu” table of contents are true followers of the Old One since the same names appear on the table of contents of “New Cthulhu: The Recent Weird” too. Laird Barron, Caitlin R. Kiernan, John Langan, Tim Pratt, W.H. Pugmire and Michael Shea have stories on both Ross E. Lockhart and Paula Guran’s anthologies, while Elizabeth Bear (“Shoggoths in Bloom”), Steve Duffy (“The Oram County Whoosit”), Cherie Priest (“Bad Sushi”) and Charles Stross (“A Colder War”) try to win Cthulhu’s favor with the same story. Despite the fact that these four stories are published on both “The Book Cthulhu” and “New Cthulhu: The Recent Weird” they make only approximately 15% of similar content for the both anthologies and doesn’t impede my wish to read these two collections.
Besides a strong line-up of writers, Ross E. Lickhart’s “The Book of Cthulhu” has also a very appealing cover art. Made by the Polish artist nicknamed Obrotowy (since I could not find more information about the artist I believe it is a nickname, but I am not sure) the artwork sets perfectly the tone, in terms of mood and colors, for “The Book of Cthulhu”. I also like the lettering of the cover, which together with the excellent cover artwork have the perfect visual impact for me. As I said in plenty occasions before, it is a book that will catch my eye from a bookshop’s shelves before knowing what it is about or who is the author, in this case the editor. I would pick it up and the next things to be found would be the synopsis and the table of contents:
Ia! Ia! Cthulhu Fhtagn!
First described by visionary author H. P. Lovecraft, the Cthulhu mythos encompass a pantheon of truly existential cosmic horror: Eldritch, uncaring, alien god-things, beyond mankind's deepest imaginings, drawing ever nearer, insatiably hungry, until one day, when the stars are right....
As that dread day, hinted at within the moldering pages of the fabled Necronomicon, draws nigh, tales of the Great Old Ones: Cthulhu, Yog-Sothoth, Hastur, Azathoth, Nyarlathotep, and the weird cults that worship them have cross-pollinated, drawing authors and other dreamers to imagine the strange dark aeons ahead, when the dead-but-dreaming gods return.
Now, intrepid anthologist Ross E. Lockhart has delved deep into the Cthulhu canon, selecting from myriad mind-wracking tomes the best sanity-shattering stories of cosmic terror. Featuring fiction by many of today's masters of the menacing, macabre, and monstrous, The Book of Cthulhu goes where no collection of Cthulhu mythos tales has before: to the very edge of madness... and beyond!
Do you dare open The Book of Cthulhu? Do you dare heed the call?
“Andromeda among the Stones” by Caitlin R. Kiernan
“The Tugging” by Ramsey Campbell
“A Colder War” by Charles Stross
“The Unthinkable” by Bruce Sterling
“Flash Frame” by Silvia Moreno-Garcia
“Some Buried Memory” by W. H. Pugmire
“The Infernal History of the Ivybridge Twins” by Molly Tanzer
“Fat Face” by Michael Shea
“Shoggoths in Bloom” by Elizabeth Bear
“Black Man With A Horn” by T. E. D. Klein
“Than Curse the Darkness” by David Drake
“Jeroboam Henley's Debt” by Charles R. Saunders
“Nethescurial” by Thomas Ligotti
“Calamari Curls” by Kage Baker
“Jihad over Innsmouth” by Edward Morris
“Bad Sushi” by Cherie Priest
“The Dream of the Fisherman's Wife” by John Hornor Jacobs
“The Doom that Came to Innsmouth” by Brian McNaughton
“Lost Stars” by Ann K. Schwader
“The Oram County Whoosit” by Steve Duffy
“The Crawling Sky” by Joe R. Lansdale
“The Fairground Horror” by Brian Lumley
“Cinderlands” by Tim Pratt
“Lord of the Land” by Gene Wolfe
“To Live and Die in Arkham” by Joseph S. Pulver, Sr.
“The Shallows” by John Langan
“The Men from Porlock” by Laird Barron
Posted by Mihai A. at 2:30 PM

I got a copy of this via NetGalley, and I'm looking forward to reading it. Short stories don't tend to be my thing, but this is one case in which I'll make an exception!

That is really nice! I hope to get a copy as soon as possible :)
I re-discovered short fiction. I had a period when I read only long fiction, but short fiction has its magic. I like it :)