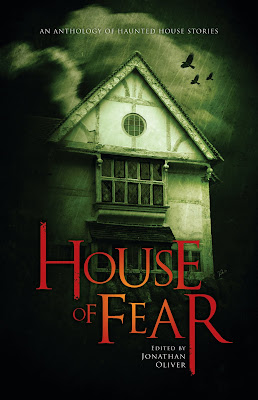 Solitude around derelict and haunted houses, with the wind constantly whistling. Or is it something else making itself heard? These premises are right up my alley and these are a part of the reasons for my attention being drawn towards Jonathan Oliver’s new and upcoming anthology, “House of Fear”. More such reasons are the other edited anthology by Jonathan Oliver, “The End of the Line”, which comes with plenty of excellent recommendations (it is one I wished to read last year but which unfortunately still waits patiently on my book shelves) and another strong line-up of authors including some of my favorites, such as Sarah Pinborough, Tim Lebbon, Adam L.G. Nevill, Christopher Fowler or Joe R. Lansdale. Enough reasons for me to eagerly await the release of Jonathan Oliver’s anthology, “House of Fear”, due to be made by Solaris Books on September, 27th in the US and October 1st, in the UK. Also I am happy to see that “House of Fear” is released a bit later this year, because I now have the opportunity to catch up with Jonathan Oliver’s other anthology, “The End of the Line”, especially since it looks like I will have a quiet and peaceful summer vacation this year.

The tread on the landing outside the door, when you know you are the only one in the house. The wind whistling through the eves, carrying the voices of the dead. The figure glimpsed briefly through the cracked window of a derelict house.

“Objects in Dreams may be Closer than they Appear” by Lisa Tuttle
“Pied-a-terre” by Stephen Volk
“In The Absence of Murdock” by Terry Lamsley
“Florrie” by Adam L.G. Nevill
“Driving The Milky Way” by Weston Ochse
“The Windmill” by Rebecca Levene
“Moretta” by Garry Kilworth
“Hortus Conclusus” by Chaz Brenchley
“The Dark Space in The House in The House in The Garden at The Centre of The World” by Robert Shearman
“The Muse of Copenhagen” by Nina Allan
“An Injustice” by Christopher Fowler
“The Room Upstairs” by Sarah Pinborough
“Villanova” by Paul Meloy
“Widow's Weeds” by Christopher Priest
“The Doll's House” by Jonathan Green
“Inside/Out” by Nicholas Royle
“The House” by Eric Brown
“Trick of The Light” by Tim Lebbon
“What Happened to Me” by Joe R. Lansdale