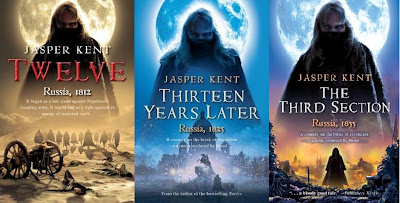 Last night I’ve started Jasper Kent’s “Thirteen Years Later”. Finally. I reached only 50 pages, but I was immediately caught and besides that I wish to go back as soon as possible and lose myself in Aleksei Ivanovich Danilov’s adventures I was left wondering what took me so long to start reading the second novel in Jasper Kent’s “Danilov Quintet”. Especially since I loved “Twelve”, the first novel of the series. Well, better late than never.

The good news, however, is that Jasper Kent’s series will be true to its name and actually be a quintet, hosted by Transworld imprint, Bantam Press. Initially, Transworld and Jasper Kent reached an agreement for the first three novels of the “Danilov Quintet”, but since May this year the publisher acquired the rights for the final two novels as well. I am very happy to find this news, because as I mentioned in the beginning, I loved “Twelve” and I am bewitched by “Thirteen Years Later” so far. That’s why I believe that I will be ready for more and I will be willing to go all the way to the end of the “Danilov Quintet”, starting with “The Third Section”, due to be released on August, and followed by the fourth and fifth novels, both published by Bantam Press sometime in the future.

I have read Thirteen Years Later and I promise you that you will like it a lot.

Michael, I already like it a lot. I hope that it is as good as the beginning until the end :)