"The Edinburgh Dead" by Brian Ruckley 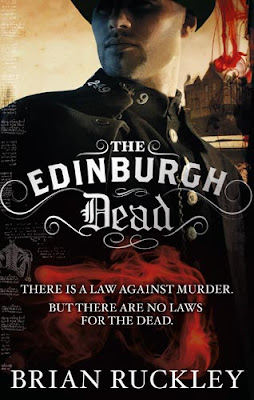 "The Edinburgh Dead"
by Brian Ruckley
Publisher: Orbit Books
Review copy received through the courtesy of the publisher, Orbit Books
Edinburgh 1828: In the starkly-lit operating theatres of the city, grisly experiments are being carried out on corpses in the name of medical science. But elsewhere, there are those experimenting with more sinister forces.
Amongst the crowded, sprawling tenements of the labyrinthine Old Town, a body is found, its neck torn to pieces. Charged with investigating the murder is Adam Quire, Officer of the Edinburgh Police. The trail will lead him into the deepest reaches of the city’s criminal underclass, and to the highest echelons of the filthy rich.
Soon Quire will discover that a darkness is crawling through this city of enlightenment – and no one is safe from its corruption.
There are occasional times when I am not very willing to look upon the bookshelves of my library. Those are the times when the time seems so short and the number of titles I wish to read so overwhelming. Authors who I love and I wish to catch up with all their works, series started which need to be finished, new writers awaiting patiently to be discovered are all reasons for a mild personal depression on those passing moments. Brian Ruckley’s “Godless World” is not a part of any of these particular points of pressure on my reading habit. He was one of the new writers who got a chance for a reading early after his first debut, his series is long since finished and he is one of the authors I love and know almost all his works. More so, Brian Ruckley’s newest novel, “The Edinburgh Dead”, stepped over the queue of waiting books and reached my reading table after a little over a month since its publication.
“The Edinburgh Dead” was born, as we can find out from the interview at the end of the novel, from Brian Ruckley’s attraction for the Edinburgh’s history and in particular from the events of the Burke and Hare murders. Brian Ruckley takes some of the events of 1828, keeps some of the historical facts alive, shifts others into fantasy to suit the needs of his plot and crafts a story that is part historiography part pseudohistory, part fact part fiction, but captivating in its entire form. Almost everything there is to know about Edinburgh of 1828 can be found in the pages of “The Edinburgh Dead”. Brian Ruckley treats, more or less, each aspect of the changing period in the life of Edinburgh within his story. The geographical, military, cultural, diplomatic, economic and environmental components are used to breathe life into Edinburgh of 1828, every detail, small or big, put in its proper place to make the setting as vivid as possible. I believe that the amount of documentation made by Brian Ruckley must be extensive, but to say that will sound overly technical. And it would not be fair, since the author softens the cold, harsh facts of history with his words and descriptions.
The core of the story is a murder investigation, but which in time turns into surprising paths and transforms itself step by step. The road taken by the investigation moves naturally and logically, there are no moments when the plot missteps or overreaches its course. And although those responsible are revealed early on the march towards the final conflict offers plenty of twists, a couple of action scenes and nothing to be taken for granted. Leading the investigation is Adam Quire, a determined sergeant in the Edinburgh Police with a tumultuous past. Brian Ruckley puts an equal effort in building the main character as in bringing the Edinburgh of 19th century to life and these efforts make Adam Quire a very strong character. Approaching Adam Quire from both his physical and mental angles Brian Ruckley makes him an entirely human character, with as much faults as qualities and a personal way of tackling life. What sets Adam Quire apart from other character will be the natural emotion of fear, felt by Adam but not as often as it should by other characters in fiction.
“The Edinburgh Dead” is not entirely without fault. We move within the confines of a time and of a profession, but we stumble upon an overly used cliché. As a matter of fact, Hollywood used the stereotype of the suspended police officer trying to solve a crime so much that it stings my eye at its faintest appearance. In Brian Ruckley’s novel, at a certain point, it would have been understandable, but it is not sustained sufficiently by the story and crumbles on itself. Also, Adam Quire is a powerful character and Brian Ruckley takes a look into his past, an interesting and excellent executed look. But it is the only one and in my opinion it would have worked if it had been included within the story instead of taking an actual journey into the past too. I did enjoy this journey into Adam’s past though, solitary as it is, and I will set this issue aside. However, Adam Quire also overshadows every other character of the cast and this is a bit unfortunate. There are a few minor characters that show promise, but their development is unfulfilled. As for the negative characters, I am certain that they would have benefited more from a grander growth of their personality. But overall, these issues have a small impact on the entire structure of “The Edinburgh Dead” and they do not make it shake or break at any moment.
It is always nice to see authors stepping over the boundaries of genres, changing theme and gear. Brian Ruckley steps on a different path with “The Edinburgh Dead”, but he does it with remarkable and magnetic style and before it I’ll take my hat off and bow to.
Posted by Mihai A. at 11:30 AM