"What They Hear in the Dark" by Gary McMahon 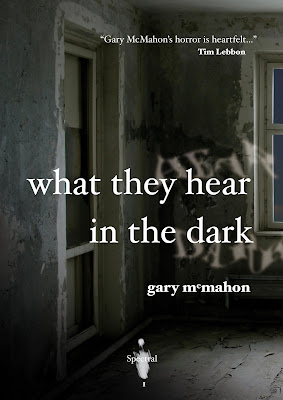 "What They Hear in the Dark"
by Gary McMahon
Publisher: Spectral Press
The review is based on a bought copy of the book
An absence is more terrifying than a presence…
Rob and Becky bought the old place after the death of their son, to repair and renovate – to patch things up and make the building habitable.
They both knew that they were trying to fix more than the house, but the cracks in their marriage could not be papered over.
Then they found the Quiet Room.
I have the chance constantly to read and review the debut works of various writers, but not very often it happens to read and review the debut title of a new publishing house. I actually think that it happened only once before. Now I had a second such chance, when Spectral Press released its first chapbook from a series of limited signed editions, I am not a very big fan of the limited editions, but that is another matter for another time, of such stories, released on quarterly basis. And what better way to start such a publishing project than releasing the work, “What They Hear in the Dark”, of one of the strongest modern horror voices, Gary McMahon, if not the strongest.
Rob and Becky find themselves in need of a dramatic change in their lives after the violent death of their son. They buy a new house, in need of heavy repair, in an attempt to give a new meaning to their lives, to have a purpose that occupies their mind and time while their emotional wounds are soothed and healed. Throughout the entire chapbook it is obvious that the house bought by Rob and Becky is a metaphor of their marriage, an extrapolation of their relationship in the new acquired house, both in a crumbling state due to an absence. The same thing is with the Quite Room, the central point of Gary McMahon’s story, again brought at the metaphorical level as well, an image of how the married couple deals with their tragic loss at individual level.
If this juxtaposition is one of the main keys of “What They Hear in the Dark”, the emotional impact brings an uncomfortable similitude between what experience the characters and the reader. Gary McMahon manages to reach beyond the pages of his story, the tragedy of the couple, more underlined by the brutal and ruthless characteristics of that tragedy, the emotional torment of the characters and the heavy atmosphere of the marriage are brought into existence with such vividness that it is impossible for the reader not to be marked. It is true that the story focuses more on Rob’s emotions, Becky’s feelings being only sketched, but that I believe that would have been a greater problem if “What They Hear in the Dark” was longer and not only a twenty pages story. Besides this minor point however, there is nothing to complain about Gary McMahon’s chapbook. The beautiful prose, the way Gary McMahon slowly reveals all the levels of his story and emotional impact make from “What They Hear in the Dark” a story that is not easy to forget.
Gary McMahon’s “What They Hear in the Dark” is Spectral Press’ first released publication, but if all its planned chapbooks are as these twenty pages of sheer emotion I am willing to be its faithful follower despite my dislike for limited editions.
Posted by Mihai A. at 12:30 PM

I have only two, Gary McMahon's and Cate Gardner's "Nowhere Hall" :)