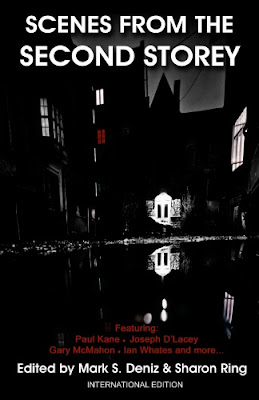 Thirteen tales of murder, revenge, betrayal, obsession and desire - your usual fare? Well not when adding the fact that all these stories were inspired by The God Machine’s album of the same name, a concept queried by some before reading the first of these two themed anthologies.

Now comes the second instalment, following on from the Australian authors penning their wonderful versions of The God Machine’s classic tracks to a mix of international authors, commissioned by Morrigan Books to give their take on the songs. How similar are the two written versions to the album’s tracks? Do they capture the essence? You, the reader, can decide for yourselves this November when the international version of Scenes from the Second Storey is released.

“Dream Machine” by Miles Deacon
“She Said” by KV Taylor
“The Blind Man” by Carole Johnstone
“I’ve Seen the Man” by Gary McMahon
“The Desert Song” by Adrienne Jones
“Home” by Shannon Page
“It’s All Over” by Paul Kane
“Temptation” by Pete Kempshall
“Out” by Mike Stone
“Ego” by Gerard Brennan
“Seven” by Joseph D’Lacey
“Purity” by T. A. Moore
“The Piano Song” by Ian Whates

Thanks, as always Mihai, for your support!

It is always my pleasure, Mark :)