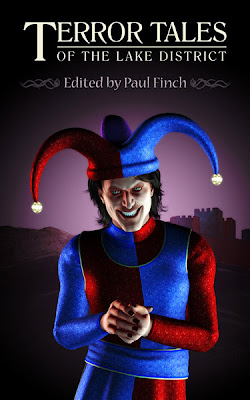 Legends and fairy tales are the most important structures in the foundation of my reading experience. Among the stories that made their way onto my reading table at the beginning of my adventure in the fiction world one in particular springs immediately from my memories, a heavy volume of collected world legends and fairy tales. I believe that I still have that volume and although it is battered by time and numerous readings I think I’ll dig it out for a pleasant journey down the memory lane. In time my taste for legends suffered changes, but my love for these particular stories only grew. This is one the reasons for Paul Finch’s anthology, “Terror Tales of the Lake District”, due to be released by Gray Friar Press this month (I believe) made the bells of my interest rang loud. And it is not the only one. The demented clown of Muncaster, the winged horror of Langdale, the drowned bride of Windermere or the nightmares on Burnmoor are offering plenty of reasons for my mind to go wild because of the curiosity inflicted by them. I will add to this a few names that are on the line up of “Terror Tales of the Lake District”, as well as on my favorites list, such as Gary McMahon, Ramsey Campbell, Simon Bestwick, Reggie Oliver and Carole Johnstone (whose stories I recently re-discovered and were more impressive than the first time) and there is no wonder that I already ordered Paul Finch’s anthology.

The Lake District — land of mountains and megaliths, night-black lakes and fathomless woods filled with spectral mist ...
The eerie entity on Striding Edge
The living corpse of Croglin
The demented clown of Muncaster
The winged horror of Langdale
The drowned bride of Windermere
The hairy brute of Beetham
The nightmares on Burnmoor
Chilling tales by Ramsey Campbell, Adam Nevill, Simon Clark, Peter Crowther, Reggie Oliver, Gary McMahon and other award-winning masters and mistresses of the macabre.

This wild, mountainous region in northwest England is famous for its towering crags, deep woods and majestic lakes. It is still one of the most popular holiday destinations in the whole of the UK, particularly for climbers, hikers, campers and yachtsmen. But some corners of it are extremely remote and even now in the 21st century remain wreathed in rural mystery and spooky superstition.
This brand new anthology, edited by master of chills, Paul Finch, contains ten works of original horror fiction all set in England's haunting Lake District, and three classic reprints. It also features numerous anecdotal tales concerning true incidents of Lakeland terror which will ensure you'll never regard that scenic part of the world in the same innocent light again.

“Little Mag’s Barrow” by Adam L.G. Nevill
The Mad Clown of Muncaster
“The Coniston Star Mystery” by Simon Clark
The Croglin Vampire
“Devils of Lakeland” by Paul Finch
The Mumps Hall Murders
“The Moraine” by Simon Bestwick
The Tawny Boy
“The Claife Crier” by Carole Johnstone
The Monster of Renwick
“Jewels in the Dust” by Peter Crowther
The Devil’s Hole
“Above the World” by Ramsey Campbell
Nightmares of Burnmoor
“The Jilted Bride of Windermere” by Gary Fry
The Horror at Carlisle Castle
“Walk the Last Mile” by Steven Savile
The Poltergeist of Walla Crag
“Framed” by Peter Bell
Fiend’s Fell
“Night of the Crone” by Anna Taborska
The Tortured Souls of Lord’s Rake
“Along Life’s Trail” by Gary McMahon
The Black Hound of Shap
“Striding Edge” by Reggie Oliver