"Blood of Elves" by Andrzej Sapkowski 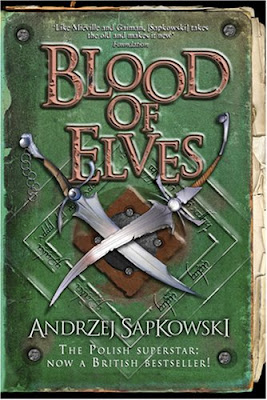 "Blood of Elves"
by Andrzej Sapkowski
Format: Paperback, 320 pages
Publisher: Gollancz
For more than a hundred years humans, dwarves, gnomes and elves lived together in relative peace. But times have changed, the uneasy peace is over and now the races once again fight each other - and themselves: dwarves are killing their kinsmen, and elves are murdering humans and elves, at least those elves who are friendly to humans . . .
Into this tumultuous time is born a child for whom the witchers of the world have been waiting. Ciri, the granddaughter of Queen Calanthe, the Lioness of Cintra, has strange powers and a stranger destiny, for prophecy names her the Flame, one with the power to change the world - for good, or for evil . . .
Geralt, the witcher of Rivia, has taken Ciri to the relative safety of the Witchers' Settlement, but it soon becomes clear that Ciri isn't like the other witchers. As the political situation grows ever dimmer and the threat of war hangs almost palpably over the land, Geralt searches for someone to train Ciri's unique powers. But someone else has an eye on the young girl, someone who understand exactly what the prophecy means - and exactly what Ciri's power can do.
This time Geralt may have met his match.
Geralt was born in 1986 when Andrzej Sapkowski published his first short story, “The Witcher”, in the Polish fantasy magazine, Fantastyka. Since then Andrzej Sapkowski published more than ten short stories and five novels “The Saga”, the series featuring the character born in 1986, Geralt, with great impact on the readers and critics. In 2007 Sapkowski’s work was translated in English for the first time with his short stories collection, “The Last Wish”, and in 2009 his second translated work, “Blood of Elves”, recognize success once again receiving the David Gemmell Award.
“Blood of Elves” comes with a familiar character for those who already read “The Last Wish”, but after finishing the novel I can say that this aspect will not raise a major problem for those unfamiliar with the hero. Still, I find the fact that I have read the short story collection to be helpful, because I had an already built baggage of information when I started “Blood of Elves”, information regarding Geralt, his occupation and his relationships with other characters that appear in this novel. I say that this is not a major problem because I was aware of some of the facts developing in “Blood of Elves” some others were new to me. And this is because “Sword of Destiny”, another short stories collection featuring Geralt and which together with “The Last Wish” was published in Polish before the release of “Blood of Elves”, isn’t translated in English yet. Although that didn’t obstruct my reading I had to guess certain events that are mentioned in this novel.
Andrzej Sapkowski plays with the well known elements of fantasy in his novel. The pages of “Blood of Elves” are inhabited by dwarves, elves, halflings, wizards and magical creatures. But to the merit of the author all these elements feel fresh throughout the pages of the novel and avoid being stereotypical. The fantastic world of “Blood of Elves” is a very interesting one and I loved how Sapkowski built it. All along my reading I could journey to its past and see it take shape, through the present events and through the recollection of its history. Like the world which inhabits Geralt, the witcher, takes shape too. He is not a perfectly built character, but I am certain that his development doesn’t stop here. After I was introduced to Geralt in “The Last Wish” I could see that the author gave shape to his main character with each story and I believe with each novel. In “Blood of Elves” Geralt becomes stronger as a character and I could find out new things from his personal history and the training which a witcher takes and indirectly which Geralt took.
My absolute delight while reading “Blood of Elves” was by far the dialogues. All of the dialogues unveiled in the novel made me feel like watching a play. Sapkowski shows a great talent in crafting the dialogues, all of them flow and each replica comes in a natural and logical way. The dialogues are vivid making me feel the change in mood of the characters involved in the replicas and also help the characters become stronger. Also like in a play the chapters can be taken as acts since the characters move from chapter to chapter to a new setting and a new situation almost independent from the one before. Other delightful aspects (and ones I enjoyed in the fullest in “The Last Wish” as well) are the humor of some situations and dialogues and the way Andrzej Sapkowski brings issues of our real world in his fantastic one. And here I have to admit that although the dwarf Yarpen Zigrin (who has a relationship with Geralt from the “Sword of Destiny” but of which I am not aware) is a fun character and I liked him a lot.
I am happy that Andrzej Sapkowski’s works are translated in English and I hope in other languages too, because he is a talented author. I am also happy that his works are available to a wider audience because they certainly enrich the fantasy literature world.
Posted by Mihai A. at 12:00 PM

I loved this but I still like The Last Wish better.

You made an insightful review. I'm new to the site but like how much depth you put into your reviews. Well done.

Adele, "The Last Wish" has a bit more action. Still, I enjoyed both a lot and they made me discover a wonderful author :)

Barbara, thank you very much :)

Robertsinferno, thank you very much. I hope you like it here :)

it provides the best perspective on everything. The controls are smooth even close-up.