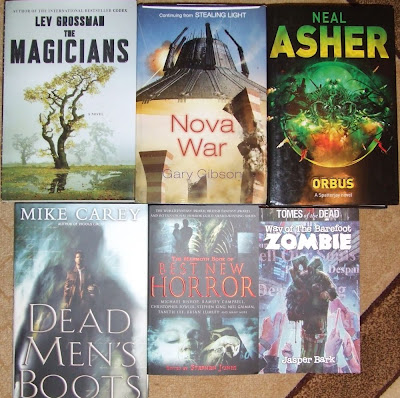 Here are the latest arrivals in my mailbox:
- "The Magicians" by Lev Grossman (through the courtesy of Viking Books);
Quentin Coldwater is brilliant but miserable. A senior in high school, he’s still secretly preoccupied with a series of fantasy novels he read as a child, set in a magical land called Fillory. Imagine his surprise when he finds himself unexpectedly admitted to a very secret, very exclusive college of magic in upstate New York, where he receives a thorough and rigorous education in the craft of modern sorcery.
He also discovers all the other things people learn in college: friendship, love, sex, booze, and boredom. Something is missing, though. Magic doesn’t bring Quentin the happiness and adventure he dreamed it would. After graduation he and his friends make a stunning discovery: Fillory is real. But the land of Quentin’s fantasies turns out to be much darker and more dangerous than he could have imagined. His childhood dream becomes a nightmare with a shocking truth at its heart.
- "Nova War" by Gary Gibson (through the courtesy of Tor UK);
In Stealing Light, Dakota discovered the Shoal’s dark and dangerous secret, now she works towards stopping not only the spread of this knowledge, but also the onset of the Nova war.
Found adrift near a Bandati colony world far away from Consortium space, Dakota and Corso find themselves prisoners of the Bandati.
It becomes rapidly clear to them, that the humanity’s limited knowledge of the rest of the galaxy – filtered through the Shoal – is direly inaccurate. The Shoal have been fighting a frontier war with a rival species, the Emissaries, with their own FTL technology for over fifteen thousand years.
Realising that the Shoal may be the Galaxy’s one chance at sustained peace, Dakota is forced to work with Trader to prevent the spread of deadly knowledge carried on board the Magi ships. But it seems that the Nova War is inevitable…
- "Orbus" by Neal Asher (through the courtesy of Tor UK);
In charge of an old cargo spaceship, the Old Captain Orbus flees a violent and sadistic past, but he doesn’t know that the lethal war drone, Sniper, is a stowaway, and that the past is rapidly catching up with him.
His old enemy the Prador Vrell, mutated by the Spatterjay virus into something powerful and dangerous, has seized control of a Prador dreadnought, murdering its crew, and is now seeking to exact vengeance on those who tried to have him killed.
Their courses inexorably converge in the Graveyard, the border realm lying between the Polity and the Prador Kingdom, a place filled with the ruins left by past genocides and interplanetary war. But this is the home of the Golgoloth, monster to a race of monsters, the place where a centuries-long cold war is being fought.
Meanwhile, the terrifying Prador King is coming, prepared to do anything to ensure Vrell’s death and keep certain deadly secrets buried . . . and somewhere out there something that has annihilated civilizations is stirring from a slumber of five million years.
The cold war is heating up, fast.
- "Dead Men's Boots" by Mike Carey (through the courtesy of Grand Central Publishing);
You might think that helping a friend's widow to stop a lawyer from stealing her husband's corpse would be the strangest thing on your To Do list. But life is rarely that simple for Felix Castor.
A brutal murder in King's Cross bears all the hallmarks of a long-dead American serial killer, and it takes more good sense than Castor possesses not to get involved. He's also fighting a legal battle over the body - if not the soul - of his possessed friend, Rafi, and can't shake the feeling that his three problems might be related.
With the help of the succubus Juliet and paranoid zombie data-fence Nicky Heath, Castor just might have a chance of fitting the pieces together before someone drops him down a lift shaft or rips his throat out.
Or not. . .
- "The Mammoth Book of Best New Horror 20" edited by Stephen Jones (through the courtesy of Constable & Robinson);
The year’s best, and darkest, tales of terror, showcasing the most outstanding new short stories and novellas by contemporary masters of the macabre, including the likes of Ramsey Campbell, Neil Gaiman, Brian Keene, Tanith Lee, Elizabeth Massie, Kim Newman, Michael Marshall Smith, and Gene Wolfe.
The Mammoth Book of Best New Horror also includes a comprehensive annual overview of horror around the world in all its incarnations; an impressively researched necrology; and a list of indispensable contact addresses for the dedicated horror fan and aspiring writer alike. It is required reading for every fan of macabre fiction.
- "Way of the Barefoot Zombie" by Jasper Bark (through the courtesy of Abaddon Books).
On a private island in the Caribbean, business guru Doc Papa has reinvented the zombie as a role-model for the superrich.
The world's business elite come to St. Ignatius to study the Way of the Barefoot Zombie and interact with a captive colony of the undead. They live with them, dress like them and act like them in order to free their own inner zombies.
Once they've learned to harness the zombie's single minded lust for food nothing will stop them from making a killing on the global markets. However, Doc Papa's plans for dominating the world's business arena go awry when the island is infiltrated by undercover operatives from the Zombie Liberation Front and a rogue priestess from Doc Papa's past.
Real Voodoo and social satire collide in this gore-drenched tale of greed and global profit.
Thank you all very much!
Posted by Mihai A. at 12:01 PM

It would be interesting to see your reviews on "Orbus" and "Nova War"...

I loved Nova War while Orbus was the first Neal Asher book I did not enjoy - for newbie Asher readers it may be one of the best technically as some reviews pointed out, but I found it repetitive and with nothing new, the big bad drones, fauna, Prador all done earlier...

Magicians is another one I did not enjoy - whining, self-entitled a..hole as main hero and so-so writing to boot

I'd be interested in your thoughts of Magicians. I did not like it, I tried several times, I read it then reread it quickly and still had bad things to think about it. But everyone is different :)

Aspoiu, I think that those have to wait a bit, since I am not familiar with the authors' series and usually the Fantasy titles have priority :)

Liviu & Cindy, I have to see what "The Magicians" is about since I saw some very good reviews for the book :)

I thought so, but there is no problem, SF gets its share :D

Nice stash! I have just been sent the first book in the Felix Castor series to review. I'm really looking forward to reading it. All your books sound great. Happy reading!

Book Chick City, I liked the first Felix Castor novel and I am eager to read more of them :)