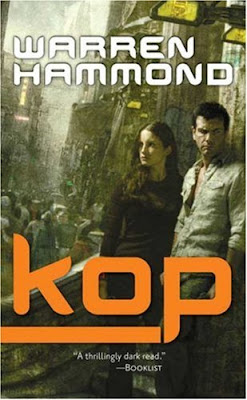 "KOP"
by Warren Hammond
Format: Paperback, 336 pages
Publisher: Tor Books
Juno is a dirty cop with a difficult past and an uncertain future. When his family and thousands of others emigrated to the colony world of Lagarto, they were promised a bright future on a planet with a booming economy. But before the colonists arrived, everything changed. An opportunistic Earth-based company developed a way to produce a cheaper version of Lagarto’s main export, thus effectively paupering the planet and all its inhabitants.
Growing up on post-boom Lagarto, Juno is but one of the many who live in despair. Once he was a young cop in the police department of the capital city of Koba. That was before he started taking bribes from Koba’s powerful organized crime syndicate. Yet despite his past sins, some small part of him has not given up hope. So he risks his life, his marriage and his job to expose a cabal that would enslave the planet for its own profit.
But he's got more pressing problems, when he's confronted with a dead man, a short-list of leads, and the obligatory question: who done it? Set up for a fall, partnered with a beautiful young woman whose main job is to betray him, and caught in a squeeze between the police chief and the crooked mayor, Juno is a compelling, sympathetic hero on a world that has no heroes.
“KOP” is the debut novel of Warren Hammond and one which comes with an appetizing teaser for both mystery and science fiction lovers, a detective story set in a distant future on a colony planet far away from Earth.
Like I said in another review I grew up mainly with detective stories, stories I am still fond to, and the teaser of “KOP” appealed to me immediately as I read it. The novel is a techno noir science fiction detective one, if I can define it in this way. The story kicks off with the investigation of a murder case and which will lead the main character, Juno Mozambe, to a deeper machination. What I liked at the story built by Warren Hammond is that he manages to keep its mystery all the way to the end and offers a few surprises along the way. What I also liked is that the story comes not only with the main conflict that lies at the foundation of the plot, but also with an interior conflict of its main character, Juno Mozambe.
If Humphrey Bogart would have played in a Science Fiction movie I think that the role of Juno Mozambe would have suited him the best. Juno Mozambe is a dirty cop in the Koba Office of Police (KOP) who in favor for his friend and the chief of police, Paul Chang, investigates what appears to be a simple murder case. Warren Hammond inflicts life in his main character through the pages of his novel. Juno comes in play with the characteristics of an anti-hero, but along the development of the plot I could see more in the depth of the character. In the help of his development come the inner conflict of Juno and an aside story which brings the reader in the past, at the beginnings of his career, and which also clarifies some things regarding the Koba Office of Police. Juno Mozambe is an interesting and pretty strong character, but when it comes to the other ones I felt a downfall. It is true that there isn’t enough room for them to develop as much as Juno, but I felt that at least the negative characters should have benefit more from a bit more powerful construction.
The story takes place on the colony planet Lagarto, especially on its capital, Koba. And here is where I felt fully satisfied with the Warren Hammond’s novel. A planet which lived a prosperous period and after an economic crash it suffers greatly and barely survives. The planet benefits from only five hours of sun daily and has a tropical climate with which it fights every day. Literally fights since the jungle invades the streets of cities each night and the vegetation needs to be burned each day with flame throwers. The world and atmosphere are dark and grim and leaves much room for the development of businesses of dubious reputation. On such a world corruption, violence and criminality boom and from these aspects the main conflict will hit in the fullest.
With a captivating character, a plot filled with mystery and action and a savory setting Warren Hammond makes from his debut novel, “KOP”, an entertaining and fun reading.
Posted by Mihai A. at 2:53 PM