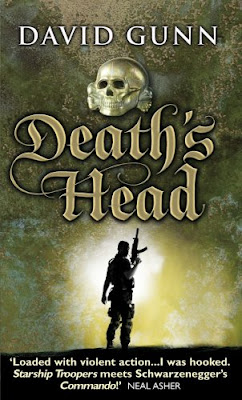 "Death's Head"
by David Gunn
Format: Paperback, 544 pages
Publisher: Bantam Press
Few survive the cage. Fewer still live to face the whipping post. Of those who do, few are in a state to know what is happening to them. One of those who does is ex-Legion Etrangere sergeant Sven Tveskoeg. As this stubborn, insubordinate son-of-a-bitch feels the first lash fall, he hears the desert tribes attack, and watches as they slaughter his comrades before they can execute him.
Rescued from certain death, Sven joins the tribes. Until his ruthless skills come to the attention of the Death's Head, the infamous elite special ops force. They want Sven to sort out a little 'local difficulty'. But it seems all is not as it should be. Sven feels he's a pawn in a deadly game, and pawns have an unfortunate habit of being sacrificed. But Death's Head Second Lieutenant Tveskoeg, Obsidian Cross 3rd Class, is nobody’s sacrifice. And even a pawn can checkmate a king…
“Death’s Head” is the debut novel of David Gunn and also the first novel in the eponymous series.
In my high-school years I spent a summer of reading in the company of Sven Hassel’s novels; 14 pseudo-autobiographical novels of adventures in the World War II. I fell in love with those novels and although they describe many horrors of war one of the words that can easily describe them is fun. Now, it looks like that summer is back once more, because “Death’s Head” very much reminded me of the Sven Hassel’s novels I read in high-school. David Gunn writes a science fiction novel, set in a distant future of our universe, with planet Earth gone and transformed into a myth, and with its main setting the theatre of war. My mind went back to those memories also because “Death’s Head” main character is named Sven and is not matching any criteria of role-model as we know it, maybe with a few minor exceptions.
Like I said, Lieutenant Sven Tveskoeg is not a role-model, but he is a very entertaining character. I become accustomed with him almost immediately and although he is not the best constructed character I’ve seen I still enjoyed following his adventures. He doesn’t show many qualities still his loyalty is to be appreciated and this is shown especially in the second part of the novel, when Sven starts forming a military group, called The Aux, and in which we will meet some of the other characters of the novel. Although I am certain that these characters will appear in the next novels of the series I found them even less developed than Sven Tveskoeg. There is another unusual character, though it is more properly a thing, Sven’s smart gun, the SIG-37. The remarks of the intelligent gun are a delight and offered me very entertaining and hilarious moments.
David Gunn presented me with an intriguing setting in his novel. I liked how he imagined the future of our universe and how he populated it. The political situation is very interesting, the inhabited planets visited in this reading offer captivating images and the alien races met in “Death’s Head” satisfied my imagination. But despite my interest in these elements, I have to say that all of them are only scratched at the surface and all of them lacking the proper depth. But despite of these elements being only hinted the novel overcomes this aspect in terms of adventure, action scenes and adrenaline pumped sequences, because these come in the fullest.
I’ll be totally honest with you, I don’t know how many details of David Gunn’s novel will stick with me for the time being, but as I like to relax occasionally watching movies like “Rambo”, so I need from time to time to relax with books such as “Death’s Head”. It certainly offered me a very fun and entertaining reading.
Posted by Mihai A. at 12:06 PM

It sounds like fun. I like bad guys in a good way as in bad for role model. They are much more fun than the paladin type of character and the gun seems like a very comedy relief prone, so it may be a great fluff book to unwind with.

Harry, Sven is not entirely a bad guy, but he is a lot of fun. So is the book :)

What I meant was bad in a bad boy, edgy and dangerous, rather than an anthagonist or villain. :)

I love this kind of stuff. I'm going to look this one up.

Theresa, it is an entertaining read. I hope you'll like it :)

If you enjoyed Death's Head you should try ALF Warz: The Iron Sergeant by Kevin Lumley.
Same hard charging prose and writing style, plenty of action and suspense.

Thank you very much for your recommendation! I'll try to look that up as soon as possible.