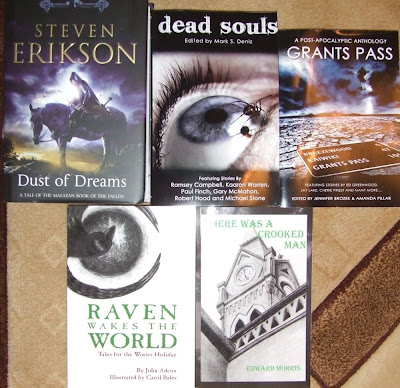 I received a few new titles in the mailbox in the last week, with one of them making me wonder once again when I'll start working on my pile o' shame:
- "Dust of Dreams" by Steven Erikson (through the courtesy of Transworld Books);
On the Letherii continent the exiled Malazan army commanded by Adjunct Tavore begins its march into the eastern Wastelands, to fight for an unknown cause against an enemy it has never seen.
The fate awaiting the Bonehunters is one no soldier can prepare for, and one no mortal soul can withstand – the foe is uncertainty and the only weapon worth wielding is stubborn courage.In war everyone loses, and this brutal truth can be found in the eyes of every soldier in every world.
Destinies are never simple.Truths are neither clear nor sharp.The Tales of the Malazan Book of the Fallen are drawing to a close in a distant place, beneath indifferent skies, as the last great army of the Malazan Empire seeks a final battle in the name of redemption. Final questions remain to be answered: can one's deeds be heroic when no one is there to see it? Can that which is unwitnessed forever change the world? The answers await the Bonehunters, beyond the Wastelands…
- "Dead Souls" edited by Mark S. Deniz (through the courtesy of Morrigan Books);
Before God created light, there was darkness. Even after He illuminated the world, there were shadows — shadows that allowed the darkness to fester and infect the unwary. The tales found within Dead Souls explore the recesses of the soul; those people and creatures that could not escape the shadows. From the inherent cruelness of humanity to malevolent forces, Dead Souls explores the depths of humanity as a lesson to the ignorant, the naive and the unsuspecting. God created light, but it is a temporary grace that will ultimately fail us, for the darkness is stronger and our souls…are truly dead.
- "Grants Pass" edited by Jennifer Brozek & Amanda Pillar (through the courtesy of Morrigan Books);
The apocalypse has arrived.
Humanity was decimated by bio-terrorism; three engineered plagues were let loose on the world. Barely anyone has survived.
Just a year before the collapse, Grants Pass, Oregon, USA, was publicly labelled as a place of sanctuary in a whimsical online, “what if” post. Now, it has become one of the last known refuges, and the hope, of mankind.
Would you go to Grants Pass based on the words of someone you’ve never met?
- "Raven Wakes the World" by John Adcox (through the courtesy of Mercury Retrograde Press);
Christmas means a hundred different things in a hundred lands. But no matter where you travel, winter is a time for storytelling. Raven Wakes the World presents four very different holiday stories sure to touch the heart and wake the wonder of the season for all readers, young and old.
- "There Was a Crooked Man" by Edward Morris (through the courtesy of Mercury Retrograde Press).
Welcome to the world of master fabulist Edward Morris, where History has been pulled down a Hieronymus Bosch rabbit-hole and everything makes far too much sense. In this first volume of Morris’s alternate history tour de force, on an East Coast two centuries after Armageddon, a rogue soldier throws himself back in Time to wreak havoc upon History and feed on the blood in the streets. He lands in the New World with the first white settlers. The Irrakwa try to stop him. And from two centuries ahead, the Law tries to follow him back…
Dare to step inside.History is only one of the things you will never see in quite the same way again.
Thank you all very much!
Posted by Mihai A. at 2:18 PM

Pile of shame indeed, get started on the Malazan books! :P

Same with me. But for once I feel good to know that we will be reviewing the same things soon. :)

Val, I really hope to get to them really soon :)