"The Reach" by Nate Kenyon 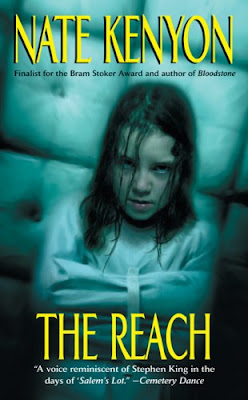 "The Reach"
by Nate Kenyon
Format: Paperback, 276 pages
Publisher: Leisure Books
Young Sarah is no ordinary girl. She’s been diagnosed as schizophrenic and locked away in a children’s psychiatric ward. But that’s not what makes her special. She also has a very strange—and powerful—gift. Scientists have been studying Sarah’s remarkable psychic power for years, enhancing it, manipulating it…twisting it into something evil. But their plans have gone horribly wrong. How much longer can they control Sarah? And what will happen if her powers are unleashed?
Nate Kenyon started his writing career with a nomination for the Bram Stoker Award for his debut novel, “Bloodstone”, and continued it with a second novel, “The Reach”, which also received a nomination for the Bram Stoker Award.
I liked how Nate Kenyon started his novel, even from the introduction part the author creates an eerie atmosphere and starts building the tension. And with each page and chapter that tension is gathering momentum, making me feel like I was watching the gathering clouds of an upcoming storm. At the time of the breaking point the author will not let loose only the gathered tension, but in the fullest his talent too, with a final scene that reminded me in the complimentary way of one particular scene from Stephen King’s “Carrie”.
Nate Kenyon doesn’t stay tight-laced in the elements of a horror novel and uses elements of other genres for building a captivating and plausible story. I liked that the author manages masterfully to create a mystery around the key figures of his novel, but also manages to keep that mystery until the last possible moment. Helping himself with many thriller elements and mixing them with supernatural ones Nate Kenyon will make a plot that makes the reader feel pinpricked and on a constant unease. And all these make in my opinion a very good horror story.
The characters, especially the main ones, are a natural presence in the story and are strongly built. Almost all of them come with a perfectly reasonable motivation, with an unsettling background and with own experiences, all more or less disturbing in their own way. Their background is logically linked with the characters present situation and will help make their actions feel natural and logical. And although some of these actions are only hinted by the author that will not make them less terrifying.
There are a couple of characters for whom I failed to find the proper place in the story. I have to admit that on one or two occasions I was left rather puzzled by the action or the motivation of a character, for example I would have liked for the author to go a bit more in depth with the motives behind Evan Wasserman’s actions. Also, on many occasions Nate Kenyon uses many technical and medical terms, but on some dialogues that will seem just a bit overused and might lose the reader.
All in all I find “The Reach” to be a very interesting and well written horror novel. And with a style that reminds me of the horror authors I fall in love with when I started reading this genre Nate Kenyon is an author who I want to read more in the future.
Posted by Mihai A. at 12:07 PM

Okay, this is on my super steroid pumped wish list. I loved "Carrie" and would love to read about another small girl with deadly super powers.

The mystery is an added bonus.

what was the other book from the same period as Carrie? The Fury? Anyway I love that cover.

Great review. Although I generally stay far away from horror novels I'm tempted to pick up this one

Harry, it is a good novel, in the tradition of the classic "Carrie", but original as well :)

Adele, I believe that's "The Fury" and it was published two years after "Carrie" :)

Simcha, it can be enjoyed by those who are not fans of horror fiction in particular too :)

This novel sounds very interesting on the basis that science has been meddling with things they know nothing about for years. The premise is right up my alley. Thanks, Mihai.

Barbara, I hope you'll like it if you get a chance to read it :)
I enjoyed it quite a lot.